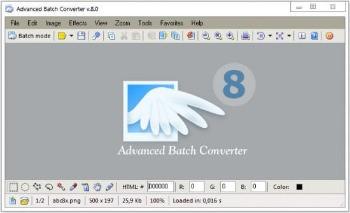 Advanced Batch Converter does exactly what its title suggests, allowing you to easily convert multiple graphics files at the click of a button. More than that, you can also edit images directly in Advanced Batch Converter, to produce a variety of effects (resize, rotate, flip, mirror, crop, filters, watermarks, morphing effects, color enhancements etc).

The actual conversion process is extremely fast, with the whole process being over in the blink of an eye.

The user interface couldn’t be any easier, making use of icons wherever possible and keeping buttons to a minimum. This results in an uncluttered layout that allows the user to concentrate on the job at hand, rather than working out what everything does.

All images can be viewed directly inside the program, with various details about the image being displayed, such as file size, image size and image name. Images can also be printed directly from within Advanced Batch Converter.

Along with the ability to batch convert you can, of course, carry out single conversions. It also includes full support for carrying out conversions (batch or otherwise) through the use of Command Line input. This enables you to carry out conversions without the use of the GUI, and to execute these from within other programs.

Image conversion is becoming increasingly essential in today’s multimedia world, and this is a powerful and cheap option to carry out the task.