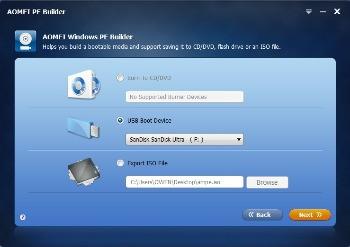 Familiar Windows Interface
When creating bootable media based on Windows PE, AOMEI integrates desktop, Windows explorer, start menu, and taskbar into the WinPE environment. This makes it easy and effortless for you to manage files and documents, just like using Windows operating system.

No Need to Install AIK/WAIK
To create a Windows PE media, typically you have to pre-install Windows AIK or WAIK, or prepare a Windows installation disc. Luckily, AOMEI PE Builder allows you to create a WinPE media without installing AIK/WAIK. It will save you valuable time and energy!

Pack Portable Tools and Drivers into Windows PE
Except many built-in tools in AOMEI PE Builder, you can still specialized your own Windows PE through the following two functions.

Network Supported
In most cases, the Windows PE created by AOMEI PE Builder can be connected to network; through the network, you can: