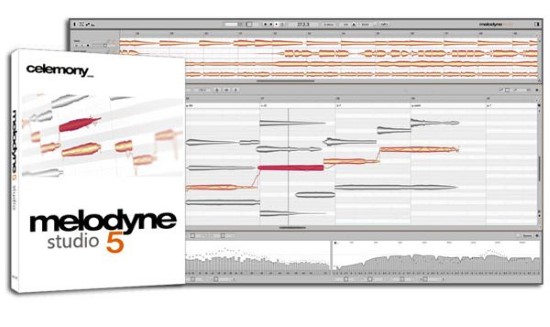 Melodyne is a software application for OS X or Windows with which you can edit audio in a more musical way than was ever thought possible. In Melodyne, you work with notes – and not with a meaningless wave form. You don’t just see where the music gets louder or quieter but also where notes begin and end and at what pitch they lie.

You can modify each note and thereby influence directly the intonation, phrasing and dynamics – and do this not only with vocals and monophonic instruments but with polyphonic instruments such as pianos and guitars as well.

Working with Melodyne is like being able to say to a vocalist “sing this note a bit longer” or to a pianist “give slightly less weight to the third in this chord” – hours, weeks, even years after the recording session.

Melodyne 4 studio
The complete Melodyne. Melodyne 4 studio offers you all Melodyne functions for both correction and creative applications on an unlimited number of tracks. You can edit the sound and musical content of your recordings in such an intuitive manner or make such far-reaching changes with no other audio tool.

New technologies and a new degree of freedom for the entire Melodyne family. Celemony is releasing Version 4 of its legendary audio software Melodyne. This constitutes the most extensive update to the entire product family in the company’s history, with the emphasis on Melodyne 4 studio.

Highlights include the Sound Editor with its totally new sound design possibilities, DNA Direct Note Access – at last, on an unlimited number of tracks – and ultra-accurate tempo detection. Furthermore, Melodyne 4 studio now also runs directly as a plug-in within your DAW – also, naturally, in 64-bit resolution. The smaller Melodyne editions – editor, assistant and essential – have also been enhanced.

You can open tracks without transfers: Just load Melodyne as an insert effect, start playback, and the entire track will appear automatically in Melodyne. There is no further need for transfers.

Melodyne follows all changes you make to the track: Melodyne compares itself with the audio track and accurately replicates any lengthening, shortening or movement of regions.

Real copies and ghost copies of regions: When regions are copied, looped or cloned, the Melodyne content behaves accordingly as a real copy or as a ghost copy (loop).

Region-based mixing: Regions edited with Melodyne now support all the Mix functions of the region inspector in Logic: gain, mute and fades.

You can use Melodyne as early as the comping stage: Now you can edit takes with Melodyne before committing yourself to a choice between them, which allows you a more realistic assessment of their respective merits, leading to better results.

The management of transfer files is a thing of the past: Thanks to ARA, it is no longer necessary to worry about transfer files when archiving or sharing projects.