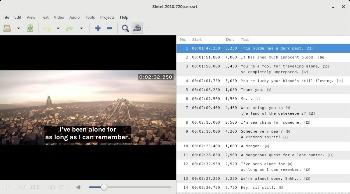 Gaupol is an intuitive and reliable software application fashioned for making the tasks of subtitle translation and editing a lot easier.. Gaupol supports multiple subtitle file formats and provides means of creating subtitles, editing texts and timing subtitles to match video. The user interface features a builtin video player and is designed with attention to convenience of translating and batch processing of multiple documents. Linux version is fully supported, Windows version is currently lacking the builtin video player.

Although not much customization can be brought to the interface of the application, you can set the width and the height of the main window to the size you desire, allowing you to easily fit the application next to a video player or to any other useful tool you might need for your subtitle project.

The simplicity of the interface, and also the ergonomically organized layout of Gaupol allow you to focus on the task at hand, instead of being distracted by the décor.

The application allows you to open more than one subtitle file, thanks to the tabbed interface, which is a useful feature to be able to access.

All the parameters of the subtitle are easily editable, allowing you to quickly make modifications to the start time, end time, duration or the main text of the subtitle.

New lines can be added after the selected subtitle, allowing you to insert missing text, and you can also split a subtitle line in two, in order to be synchronize it with the movie.

For a more customized experience while working on your subtitle projects, you can use your own video player while translating or synchronizing.

The application allows you to select your preferred movie player, which will be used for opening and previewing your on-going projects.

Another useful feature of Gaupol is the built-in spell checker, allowing you to create only quality and grammatically correct content.

A complex and efficient subtitle editor

With its comprehensible and intuitive interface, the ergonomically organized layout, and the multitude of complex and useful tools, Gaupol proves to be an inspired choice for those who want to edit or translate subtitles with ease.