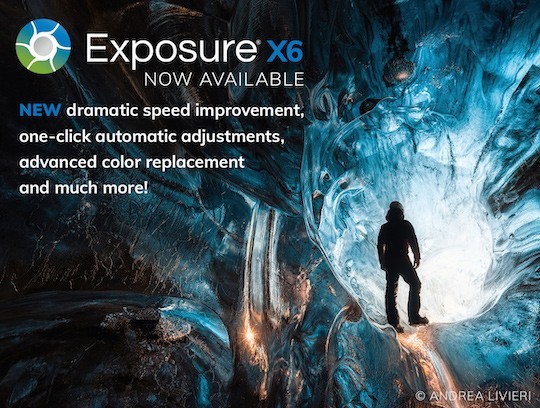 The Exposure Portable photo editing software application, that was formerly Alien Skin, has been updated with enhanced GPU optimization that allows some oft-used functions to run at three times the speed. Exposure X6 also introduces a collection of new automated adjustments that aim to make image processing simpler and to save photographers time.

Available as a standalone application or a plug-in for Adobe’s Photoshop and Lightroom, Exposure X6 introduces Auto White Balance, Auto Exposure, Auto Haze Level, Auto Dynamic Contrast and Auto Tone for creating one-click fixes for common problems. Tonal and contrast adjustments are said to avoid shifts in color saturation and hue, and the Auto White Balance adjustment is based on camera metadata. The sensor used is also taken into account in the new noise reduction feature, along with information about the ISO setting and an estimate of likely electronic noise.

A new Color Editor allows users to select and replace specific selected colors, and to make multiple color changes within the same image. These changes can be mapped and saved as presets to be used in further images so sets of pictures can have consistent adjustments made.

New in Exposure X6 is advanced GPU optimization, which dramatically speeds up image processing. GPU support works in concert with Exposure’s existing multi-core optimization to enable Exposure to leverage the full power of modern computer hardware. Many frequently used editing operations have been sped up by a factor of three on typical GPU hardware. This improved performance enables editing at greatly improved speeds, reducing distraction so photographers can focus on creativity.

Using an innovative tonal-zone approach, Exposure’s redesigned shadows and highlights controls are more reliable, consistent, and accurate. These intuitive controls are particularly adept at recovering lost details in the highlight and shadow areas. The adjustments are applied intelligently to prevent unwanted color casts or hue shifts. They are exceptionally well-suited in preserving high or low key scenes.

The new Advanced Color Editor builds on Exposure’s innovative 3D color masking to enable vastly greater control of color modifications. For example, a model’s blue dress can be changed to red in just a few clicks. Photographers can select source and target colors based on luminance, hue, and saturation attributes. It is even possible to select multiple color replacement mappings and save them as a preset to be reused.

About Exposure
Exposure began in 2005 as a film simulation plug-in for Photoshop, and was immediately embraced by digital photographers of all genres seeking to recapture the organic look of film. Over the years, Exposure became a legend among plug-ins, and evolved into a standalone full-featured editing and organizing solution for creative photographers. 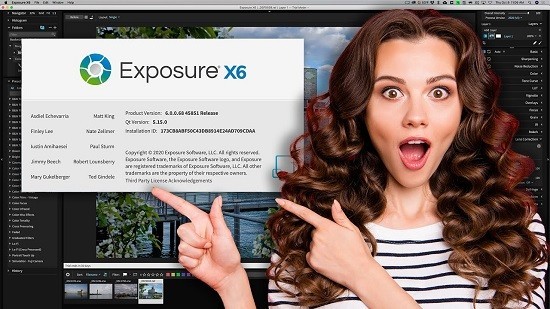