How to Make Portable Software

There are several methods you can use to make portable software and several tools can be used. I would like to focus this tutorial on one specific program I really love and use every day…CAMEYO.

It has a fast learning curve and you can “release” your portable apps in a few minutes. People at CAMEYO offer a fully functional FREE version of their software altough, for extreme customizations of the packages created by CAMEYO a license is more than reccomended and far cheaper than competing programs.

The process of turning a program into a portable software is called “packaging”. The process consists of making a snapshot of your system before the installation of the program you want to make “portable” then  Cameyo “captures” the installation and it “packages” all the differences that the program setup has made in your sytem giving you a ready to run portable app. Once this step is done, you will be able to use this software on any machine without having to re-install it again. Also, portable apps created by CAMEYO can work in “isolated mode”, never interfering with your Windows stability (unlike regular software).

Note: packaging has to be done on a clean virtual machine (I personally use VMWARE Workstation and Operating System only without any additional software installed on it). Avoid packaging on your own machine or any machine which has other software & components installed on it. It doesn’t harm your computer but if , for example, the program you are packaging requires some runtime files to work and your own “regular” system already has them installed…the setup won’t install them and you won’t be able to run the portable app on a different system that doesn’t have those runtimes.

1. Launch Cameyo and select “Capture an installation” in the startup menu: 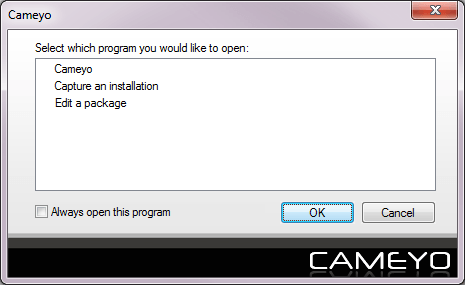 2. Wait for the Packager to capture a pre-installation snapshot of your system in its current state.

3. Once the snapshot is taken, the following window will appear:

At this point, install the software you wish to package (setup, registration, custom settings…everything is captured by CAMEYO).

4. When your software finished installing, press “Install done” on Cameyo’s packager window you see at the bottom right corner of your screen. Cameyo will again take a few minutes to establish a snapshot of your system (this time post-installation) and analyze the differences.

5. You’re done! The package is placed under the “My documents\Cameyo packages” folder:

Unlike other portable software maker tools, Cameyo does not require you to edit every virtual package you create. The program is ready to be run but almost always you will want to customize the “package”, removing un-needed files (uninstallers for example).

You can edit a package either by dragging it into the Cameyo.exe executable OR by launching Cameyo and selecting “Edit a package”.

Once the package opened, the screen will look as follows: 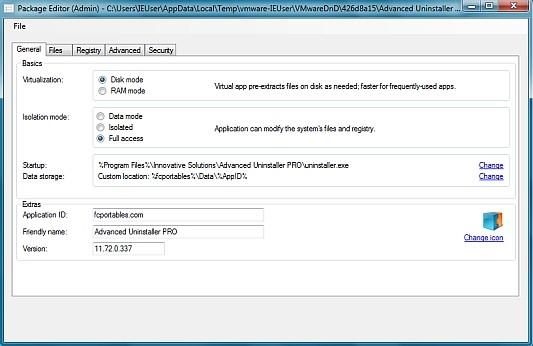 From that screen you can edit every aspect of your portable app…icons, memory management, where to save settings, isolation mode…and much more.

CAMEYO is a really powerful tool to make portable software. People at CAMEYO is responsive and they have a support forum where you can take advantage of other “portable makers” experience.