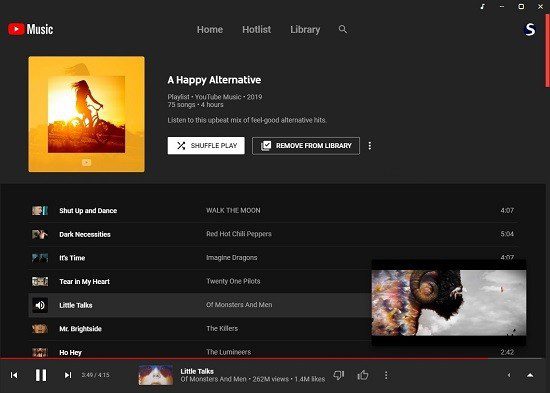 Given that many people listen to music primarily via YouTube, it is no surprise that Google has taken the initiative and developed a similar service designed only for listening to music and watching music videos. However, YouTube Music is only available as a browser-based service.

YouTube Music Desktop Portable is an Electron-based application that provides users with an alternative, enabling them to access the service directly from a desktop app. It is a simple wrapper around the web UI, so nothing too spectacular, but it does the job.

Assuming your country is among those where YouTube Music is available, and you have used the service before, this desktop application will not seem too different. The UI is essentially identical to that of the web service, as the app is just an Electron wrapper for the website.

One difference is that you can view any song’s lyrics by clicking the button on the right side of the title bar. The lyrics window can be moved around, and it isn’t minimized with the application.

One big advantage this application has over the web service is the ability to use media keys. You can play, pause, and switch tracks using just your keyboard, and the app can even display desktop notifications on track changes.

Moreover, some simple media controls, along with like and dislike buttons, are embedded into the taskbar preview. Just hover over the taskbar icon to bring up the controls to play/pause, change tracks and like or dislike the song.

If you’re happy with the YouTube Music web UI and just want to listen to your songs without a web browser, this application is the perfect alternative. It is almost identical to the browser-based version of the player, with a few additions like lyrics, media keys and taskbar media controls.

Lyrics
See the lyrics of your favorite songs

Settings
Settings to your choise