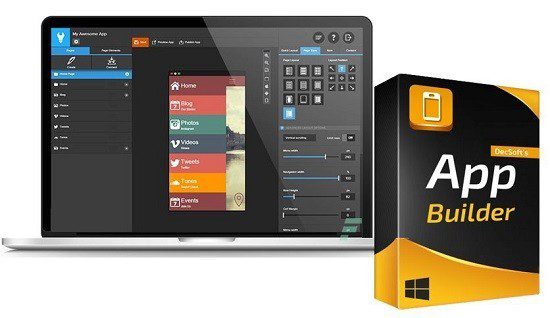 App Builder is an advanced yet user-friendly software utility whose purpose consists of helping people create their own HTML5 programs, even if they lack advanced knowledge in the field, as they will not be required to write a single line of code, if they do not want to. App Builder provide us with dozens of visual and non visual controls we can simply drop it in the application’s designer. Timers, HTTP Clients, Text Inputs, Push Buttons and many more controls ready to use.

In what concerns its appearance, the tool may seem a bit cluttered at first, seeing how all of its panels, ‘Tools’, ‘Actions’, ‘Objects’, ‘Views’, and others, are displayed on the right, left and lower edges of the main window, thus leaving little space for the working area.

However, all the panels can be pinned or unpinned from the window, allowing users to place them anywhere on the screen. Once developers figure out which components they have the most use for, they can easily close all others.

HTML5 visual app design with nothing but a couple of mouse clicks
App Builder relies on the concept of visual programming, thus requiring no code writing to take place. It allows users to create applications in any set of height and width values, centered horizontally or vertically, as well as make them scalable.

With the help of the ‘Tools’ and ‘Actions’ panels, users can insert various ‘Containers’, ‘Buttons’, ‘Inputs’, ‘Contents’, ‘Tasks’, ‘Databases’, ‘Media’, ‘Non-Visuals’ or ‘Design’ elements, as well as ‘Timer’, ‘Views’, ‘Control’, ‘Arrays’, ‘Watcher’, ‘Variables’, ‘Sensors’, ‘Strings’ and other ‘Functions’, with just a click on the targeted item, then on the working area.

Each new item can be customized in terms of ‘Behaviour’, ‘Style’, ‘Hover’ and ‘Focus’ preferences. Once users consider they have finalized their application, then have the option of debugging it, from the ‘Run’ menu, to identify any possible issues, then they can ‘Build’ it, generating the output result.

An intuitive HTML5 visual app creator
Overall, App Builder is a practical and effective programming solution which can assist aspiring developers to create HTML5 apps, even if their knowledge of code writing is limited to non-existent, as the entire operation, from start to finish, is done visually.

Mar 31, 2020
Loading ... Load More Posts No More Posts
You cannot print contents of this website.
We use cookies to ensure that we give you the best experience on our website. If you continue to use this site we will assume that you are happy with it.OkRead more