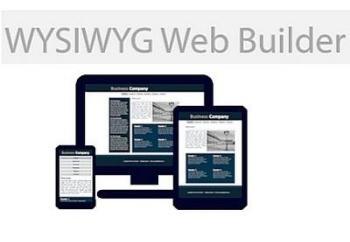 WYSIWYG Web Builder is a WYSIWYG (What-You-See-Is-What-You-Get) program used to create web pages. WYSIWYG means that the finished page will display exactly the way it was designed.

What is new in WYSIWYG Web Builder 15?
Direct2D rendering
The graphics engine for workspace rendering has been completely redesigned using hardware acceleration (direct 2d), for better performance and higher quality graphics during design time. This means rendering should be much faster and the graphics will be sharper even when zooming in/out.

New Icons
The ribbon, toolbars, menus and toolbox have redesigned icons. The style is thin, lined & colored, inspired by the new icons introduced by Microsoft® in the products of Office 365® and 2019 suites.

Shape Dividers
– New feature: Added Shape divider to layer, layout grid and flex box container. Shape dividers are SVG based shapes that can be used to separate the sections of a page.
There are more than a dozens shapes you can choose from, but you can also add custom shape SVG files.
Shapes dividers can be added at the top or bottom (or both) of a layer.
The color specifies the color of the shape. The width specifies the width in percentages, this can be useful if you only want to display a smaller part of the shape, for example 200%, clips the left and right part of the shape.
The height is in pixels.
Shapes can be flipped horizontally/vertically. This makes it possible to use shapes that were designed to be used at the top, also at the bottom (flip vertically).
The arrangement property controls whether the shape will be displayed underneath the content or on top of content.
Shapes dividers are SVG files and are stored in the folder ‘dividers’ of the application folder.

Besides built-in pre-defined border images you can also use your own images. The border images have several repeat options like repeat, space, round or stretch.

Toasts
– New feature: Toasts are lightweight notifications designed to mimic the push notifications that have been popularized by mobile and desktop operating systems. They can be displayed at page load or with delay. Multiple Toasts will automatically stack vertically.

Wrap Text
– New feature: Added support for floating layout, so the ‘Wrap Text’ can be used inside a layout grid. This makes it possible to wrap text around images or other objects. Child elements can either float left or right.
– New feature: Added experimental support for CSS’s shape-outside. This will wrap the text around the outline of a (transparent) image or shape, making it possible to wrap text around complex objects rather than simple rectangular boxes. Note that this will only work in modern browsers (Safari, Chome, FireFox, not in IE or Edge!)

Card Container
– New feature: Added ‘Card Container’ object. This is a dedicated container for Cards to simplify laying out a series of cards.
The Card Container has the following layout options:
– card deck: automatically aligns the cards horizontally with equal width and height. Even with different content lengths!
– card columns: organize the cards into Masonry-like columns. Cards are ordered from top to bottom and left to right.
– carousel: displays the cards in an animated carousel. The number of cards per slide and spacing is configurable per breakpoint. It is also possible to set how many cards will be scrolled per page. When you set a negative delay, the carousel will scroll continuously (like a Conveyer Belt).
The card carousel can be controlled via events: media play, media stop, slideshow next, slideshow previous
Note: of course you can still use layout grids, flexbox or flexgrid for laying out cards.