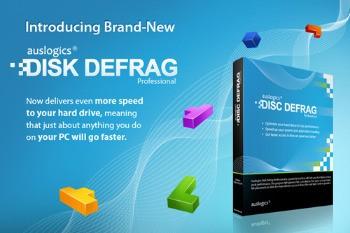 Auslogics Disk Defrag Ultimate portable now delivers even more speed to your hard drive, thanks to new optimization algorithms and boot-time defrag technology. The program increases file access speed, meaning that just about everything on your PC will work faster. Auslogics Disk Defrag Pro uses 4 different algorithms for intelligent file placement, your hard drive will always run at its top speed. Use the Wizard to identify best defrag methods for your PC and decide which defrag algorithm to choose. Auslogics Disk Defrag Pro not only defrags, but also can prevent further fragmentation by leaving free space after specified files. For faster and safer defragmentation, you can set the program to remove temp files and check disks for errors. Limit the use of system resources by the defrag process when you’re at your PC, or lift any restrictions for faster defrag.

Speed improvements and disks’ state can now be easily tracked through detailed reports and performance charts. Now you can defrag every single file, including crucial system files that are normally locked by Windows.

Auslogics Disk Defrag Ultimate is designed for fast optimization of today’s modern hard disks. Get the maximum performance out of your expensive hardware investments and save your time by defragmenting only necessary files, instead of defragmenting an entire hard drive.

• 4 Optimization Algorithms
There are 4 disk optimization algorithms available for you to choose from. Use the Optimize by Access Time method when you want to have faster access to frequently used files. In order to speed up your system loading and application startup, use the Optimize by Prefetch Layout algorithm. If you just want to reduce further file fragmentation, then choose Optimize by Change Time. And finally, the Optimize by Disk Zone algorithm allows you to manually specify which file types or even individual files should be written to the faster part of the disk.

• Free Space Consolidation
Use the Free Space Consolidation algorithm to greatly slow down the process of file fragmentation. This optimization method merges free space on your disk into a large contiguous block, which makes it possible for new files to be written without fragmentation. Note that while consolidating free space, the program also defragments files. But you can set the program not to defragment files in order to make the consolidation process go faster.

• Comprehensive Reports
With new comprehensive reports in the Professional version, it is easy to track all of the operations performed by the program. You can view the degree of file and free space fragmentation, size of the largest contiguous free space block available on your disk, and number of files processed during each operation. You can also track the general condition of your disk and performance improvements through graphic charts. All reports can be viewed, printed and stored in a format convenient for you.

• Resource Management
Auslogics Disk Defrag Ultimate allows you to easily control the load on system resources produced by the defragmentation process. Restrict the use of system resources by the program when you are at your PC, or lift any restrictions to defrag your disks faster. There are 4 pre-defined resource usage profiles you can choose from. Alternatively, you can create your own profile with specific CPU and disk usage restrictions. You can also restrict launching defragmentation process when a specified application is running or your laptop switches to battery power.

• Single File or Folder Defragmentation
Sometimes it makes more sense to defragment frequently used files only, instead of defragmenting the entire drive. Auslogics Disk Defrag Ultimate can save your time by defragmenting only the files you want. It allows you to defragment a single file, several files or an entire folder. This option is useful when certain files need to be defragmented to speed up an application and there is no need to defragment the entire hard drive.

• List of Fragmented Files
Auslogics Disk Defrag Ultimate lists all fragmented files after performing disk analysis. Selecting a file from the list will highlight its fragments’ location on the cluster map. You can find the most fragmented files and their paths by sorting through the list. The list also lets you choose files to defragment and files to add to the ignore list. All you need to do is right-click on a file in the list and select the operation you want to perform.

• Defragmentation Wizard
With so many disk optimization algorithms and defrag options available, how do you choose the right one for your PC? Thanks to Defragmentation Wizard, it’s a matter of just a few simple clicks. All you have to do is specify what purpose you mostly use your computer for (home, office, gaming or as a server), how often you work with various types of documents, and when your PC is on, but is not in use. This information will help the program suggest optimization algorithms that will work to achieve optimal disk and system performance.

• Advanced Scheduler
A wide range of scheduling options makes it easy to maintain your hard drive in a consistently good shape. You can set the program to run precisely at the specified time, or alternatively, use Auto Defragmentation mode. The latter enables the program to defragment and optimize your disks in real time, making sure that file fragmentation is eliminated as soon as it occurs. And thanks to adjustable resource usage restrictions, any of the scheduled tasks won’t ever disturb you while you work or play on your computer. 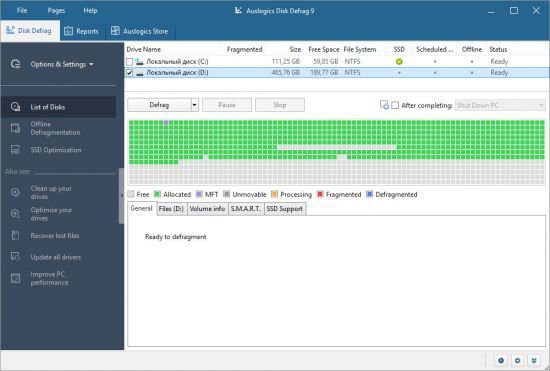