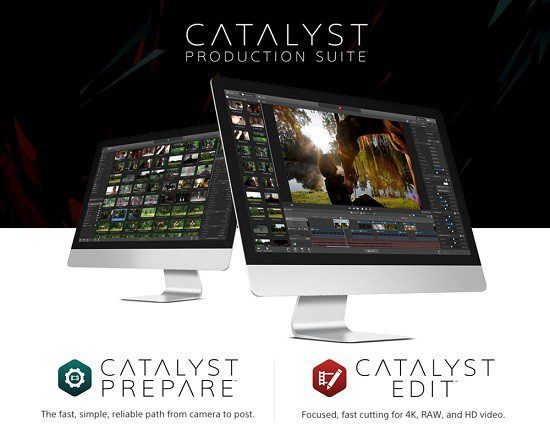 With support for 4K, Sony RAW, and HD media, Catalyst Production Suite gives you the power to make the most of your camera’s high dynamic range and wide color gamut as well as the stunning resolution of 4K from beginning to end.

The Catalyst Production Suite workflow
With strong family support, you can accomplish amazing things. The Catalyst family provides powerful media prep and focused, fast editing that you can rely on to translate the vision in your head to an experience that moves your viewers.

Catalyst Edit
In Catalyst Edit, turn your beautiful footage into a polished, finished product. To save time, access your Catalyst Prepare libraries directly and import existing storyboards to cut your project together quickly and creatively. The focused toolset gives you quick access to all the essential cutting tools as well as effects, titling, and other tools to bring your production from imagination to screen.

Notable fixes/changes:
– The waveform and histogram monitors now display full-range (-7.3% to 109.1%) rather than clipping at 0% and 100%. Areas outside 0-100% are shaded in the histogram monitor. Full-range color is also supported for external-monitor preview.
– Changed the default audio pan type from Constant Power to Balanced to prevent possible audio-level changes during transcoding.
– Fixed a bug that could cause the application to hang during playback on systems with an NVIDIA GPU.
– Fixed a bug that could result in a stream error in rendered XDCAM files.
– Fixed a bug with the OpenFX position control.

Notable fixes/changes:
– Added support for copying growing MXF files via FTP/FTPS from Sony decks. Growing files are closed automatically after copying.
– Added a Close growing files check box in the Copy pane to close growing files generated by Sony decks.
– The MXF file style item in the Inspector File tab now indicates whether the selected MXF clip is a growing or closed clip.
– Added support for formatting USB drives for the Sony PZW-4000 deck. In Organize mode, select a USB drive in the Devices tab, click the Tools button, and choose Format for PZW-4000 from the menu.
– Note: If the drive you want to format is not displayed in the Devices tab, you may need to format it using your computer’s operating system first.
– Added support for VENICE RAW/X-OCN files.
– Added new Anamorphic desqueeze and Masking ratio settings in the Clip Settings menu.
– Added support for s709 LUT look profiles when the Source Color Space Convert to drop-down list is set to S-Gamut3/S-Log3 or S-Gamut3.Cine/S-Log3 and the Working color space drop-down list is set to Rec.709 or Log.
– White balance adjustment (Adjust Color > Source Settings > Temperature and Tint) has been revised for compatibility with Sony cameras.
– Added full- and half-resolution render presets when transcoding to DPX and OpenEXR formats.
– Added new Black adjustment controls in Application Settings to adjust black levels when the Working color space is set to Rec.2020/S-Log3 (HDR). Select the Black adjustment switch and drag the Master black slider to set the master black level and drag and the HDR black offset slider to apply an offset to the Master black value for HDR content.
– Note: The Master black and HDR black offset values should match the settings on the HDRC-4000 HDR Production Converter Unit. On the HDRC-4000, the SETTING MODE should be set to SONY SYSTEM CAMERA, and the ABS mode should be set to enabled.
– SDR knee parameters have been revised for the compatibility with HDRC-4000, ABS mode.
– Added a Preserve source UMID check box in the copy pane. Select this check box if you need to preserve a clip’s UMID (Unique Material Identifier) when copying it to a Sony deck via FTP.
– Added support for reading Rec.2020/HLG and Rec.2020/PQ metadata in ProRes clips.
– The File tab in the Inspector now displays Color primaries and Coding equations metadata for the selected clip.
– The File tab in the Inspector now indicates whether NRT metadata (non-real-time metadata) exists for the selected clip.
– Improved audio processing to preserve audio levels when transcoding from stereo to mono or multichannel formats.
– Improved transcoding performance when Optimize encoding speed was selected in the Encode mode drop-down list when using some NVIDIA GPUs.
– When the Working color space drop-down is set to Rec.709, the Convert to drop-down list in the Adjust Color workspace now defaults to 709(800) Hypergamma for HDR source clips so the default preview is not washed out or dark.
– Fixed a bug that could cause the application to crash when dragging a clip from the Windows Explorer or Finder to a storyboard.
– Fixed a bug that could prevent clips from copying successfully via CIFS (Windows only).
– Fixed a bug that could prevent clips from being deleted correctly when attempting to delete multiple clips from an FTP/FTPS device.
– Fixed a bug that could prevent metadata from being displayed correctly in the Inspector after renaming a clip on an FTP/FTPS device.
– Fixed a bug that prevented clips that were copied with the Copy only between mark points check box selected from playing correctly on a camera.
– Fixed a bug that could result in incorrect color space when transcoding with the Add watermark check box selected.
– Fixed a bug that could cause summary metadata to be discarded in some cases when transcoding with Use mark in/out points selected.
– Fixed a bug that could cause files from SD cards to display black thumbnail images and video after changing media.
– Fixed a bug that could cause corrupted thumbnail images after exporting MXF clips to AVC/AAC format.
– Fixed a bug that could prevent audio output when previewing ProRes clips in some cases.
– Fixed a bug that could prevent the Export clips to path from being preserved in some cases when exporting a storyboard.
– Fixed a bug that could cause rendering to fail when stabilizing long clips. 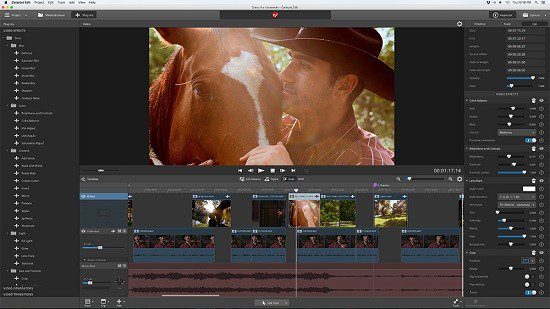 Mar 30, 2021
Loading ... Load More Posts No More Posts
You cannot print contents of this website.
We use cookies to ensure that we give you the best experience on our website. If you continue to use this site we will assume that you are happy with it.OkNoRead more