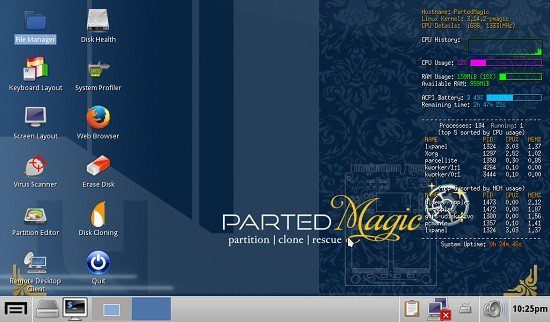 Disk Partitioning
PartedMagic has the tools to get the job done. With the Partition Editor you can re-size, copy, and move partitions. You can grow or shrink your C: drive. Create space for new operating systems. Attempt data rescue from lost partitions.

Disk Cloning
Clone a computer’s entire disk or a single partition. The cloned data could be saved as an image-file or as a duplicated copy of the data. The data could then be saved to a locally attached storage device, an SSH server, a Samba Server, or a Network File System share. The clone file can then be used to restore the original when needed.

Disk Erasing
PartedMagic comes with easy to use solutions for conventional overwrite. Internal Secure Erase. Wiping of only Free Space.

Benchmarking
All the benchmarking tools you would ever need! Bonnie++, IOzone, Hard Info, System Stability Tester, mprime, and stress.

No Installation Required!
PartedMagic is a stand alone Linux operating system. Runs from a CD or USB drive. Nothing installed.

Disk Partitioning Software?
Disk partitioning divides a hard disk into multiple storage units referred to as partitions. A physical disk with multiple partitions is useful for running more than one operating system. Each Partition may use a different file system.

SSD Secure Erase?
When Parted Magic Secure Erase is issued against a SSD drive, all of its cells will be marked as empty.

Benchmarking Software?
A benchmark program tests the relative performance of computer by running a number of standard tests and trials against it.

Features:
– Format internal and external hard drives;
– Move, copy, create, delete, expansion and contraction of partitions on the hard disk;
– Cloning hard drives to create a full backup;
– Verification of hard disks and diagnostics;
– To check the memory for bad sectors;
– Benchmark your computer to assess its level of work;
– Delete all data on the hard disk without the possibility of recovery;
– Provides access to the hard disk when not zagruzayutsya systems, is saving important data;
– Boot from CD / USB memory, then can work without CD / USB;
– Supports network connections.

Please consider supporting us by disabling your ad blocker