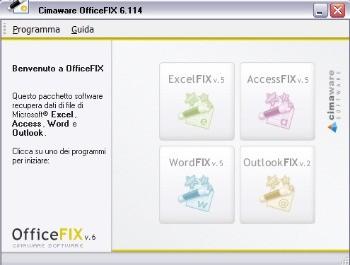 ExcelFIX — is the best solution for repairing corrupt Microsoft® Excel files and restoring the data. It is the only one that recovers all important details such as graphs and images.
The following are some of the features of ExcelFIX:
• Recovers texts, numbers, and formulas and saves the recovered data in a new trouble-free file.
• Supports Microsoft® Excel 95, 97, 2000, 2002 (XP), 2003, 2007, 2010 and 2013.
• Recovers formats, column widths, row heights, merged cells and more.
• Recovers charts, bitmaps and other objects.
• Recovers names, external references and multi-sheet ranges.
• Recovers cell comments.

OutlookFIX — is the best Microsoft® Outlook PST file recovery and undelete program. It is the only one that recovers all the elements and important details.
The following are some of the features of OutlookFIX:
• Recovers damaged and corrupt Microsoft® Outlook PST files, including those that have exceeded the 2GB limit.
• Supports all versions of Microsoft® Outlook including Outlook 95, 97, 2000, 2002 (XP), 2003, 2007, 2010 and 2013.
• Repairs all properties in emails, contacts, calendar, notes and tasks (To, From, date, importance, etc.).
• Restores deleted Outlook elements including emails, contacts, calendar, notes, attachments and tasks.
• Recovers files that have exceeded the 2GB limit.
• Allows you to split large PST files into several smaller ones, reducing the file size.
• Recovers attachments, including documents and images attached to emails or embedded into the HTML body.
• Recovers password protected files.
• OutlookFIX recovers all elements: emails, contacts, calendar items, notes and tasks.