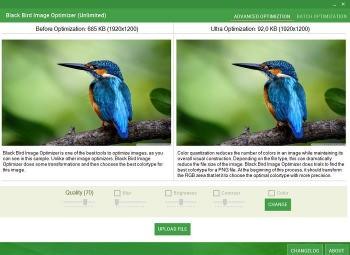 As simple and as intuitive as an image optimizer should be
Besides making sure that .NET Framework 4.0 or later is present on your computer’s system, the deployment process is a fairly typical one thanks to a streamlined, wizard-based installer. Once you are met by the app’s main window, it should become quite clear that this is by no means a complicated application. There are basically two modes for optimizing your pictures, an Advanced Optimization mode which allows you to make use of four optimization methods, namely, Brutal, High, Medium and Low, and a self-explanatory Batch Optimization mode.

Practically no change of getting something wrong while using this app
In the first mode, the app’s main window is basically split into two equal parts, one that allows you to preview the picture and its size before the optimization while the other will display the result. That said, simply upload the picture, choose the optimization mode from the upper-right side of the main window, and click save the results, using the dedicated buttons.

A noteworthy feature is the fact that the app provides you with a clear explanation regarding the actual changes that will be done to your pictures depending on your optimization level. As we’re sure you’ll notice, most of the optimization modes rely on a form of color quantization which means that the app reduces the number of colors from the original image while maintaining the overall aspect intact.

Overall, a fairly competent image optimizer, however, it might just be a bit too pricey
As far as image optimizers go, Black Bird Image Optimizer is not too shabby. It features a fairly decent optimization algorithm, it offers a modern interface, both single and batch optimization modes, four optimization levels, and enough user feedback to make even the most novice of users feel right at home.