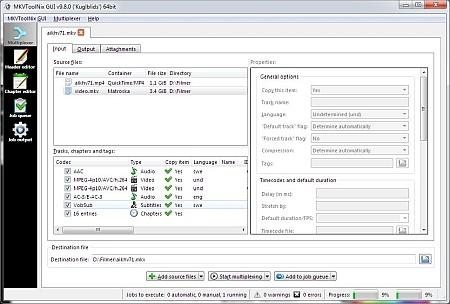 MKVToolNix Portable is a set of tools to create, alter, split, join and inspect Matroska files(mkv). With these tools one can get information about (mkvinfo) Matroska files, extract tracks/data from (mkvextract) Matroska files and create (mkvmerge) Matroska files from other media files. Matroska is a multimedia file format aiming to become THE new container format for the future. MKVToolnix Portable is an advanced application that enables you to open, examine, edit and mux Matroska files (.mkv). It offers support for other popular video file types too, along with audio tracks and subtitles.

The tool enables you to view, append and take apart tracks, chapters and tags, as well as to edit a wide range of data. For example, when it comes to general track options, you can set the track name, language, default and forced track flags, tags, and timecodes.

What’s more, you can set the aspect ratio, FPS, delay, stereoscopy mode, cropping, cues, compression mode, and custom command-line parameters for enhanced functionality. External files can be embedded in the movie as attachments.

It’s also possible to create chapters and define properties, such as start and end time, flags, segment and segment edition UID, together with chapter name, language and country. Configurable global settings focus on the tag file, whether to create a WebM compliant file or not, split mode, file linking, and so on.

An important aspect worth taking into account is that MKVToolnix Portable offers support for batch jobs, which means that you can leave the workstation unattended while the tool executes time-consuming tasks.

You can examine the current command line and copy it to the Clipboard or save it to file to use in future projects, manage the queue jobs, add command-line options, load chapters from external files, edit the header, as well as save the project as an .mka, .mkv or .mk3d-formatted file.

* all: IETF BCP 47/RFC 5646 language tags: implemented support for officially registered IANA language tag extensions.
* mkvmerge: track selection: when using language tags for selecting which tracks to keep, mkvmerge will now use component-based language tag matching instead of comparing them verbatim. This means that only those components (language, region etc.) the user specified will be required to exist and be equal. For example, if a file contains three subtitle tracks with languages `es` (generic Spanish), `es-MX` (Spanish as spoken in Mexico) and `es-ES` (Spanish as spoken in Spain), the user can use `–stracks es` to match all three tracks or be more specific with e.g. `–stracks es-MX` which would only match one track. Similarly inverting the selection with e.g. `–stracks !es` would get rid of all three tracks, not just the one for the generic Spanish.
* MKVToolNix GUI: multiplexer: deriving track languages from file names: the GUI can now detect full BCP 47/RFC 5646 language tags in file names. Part of the implementation of #3173.
* MKVToolNix GUI: multiplexer: deriving track languages from file names: the default list of boundary characters now includes `-`. Part of the implementation of #3173.
* MKVToolNix GUI: multiplexer: the GUI now defaults to the “lower” process priority setting for new installations in order to leave more room for other applications, especially interactive ones. Up to and including v59 the default was the “normal” process priority. v60 changed that to “lowest”, which turned out to be much slower on Windows for no real gain over “lower”. The setting will be auto-corrected by the GUI if the settings file were saved last with a version between v60.0.0.0 & v60.0.0.17 & “lowest” & it is still set to “lowest”.
* HEVC dumper development tool: the tool has been renamed to `xvc_dump` and extended to be able to dump AVC/H.264 bitstreams, too. It now also detects the type of bitstream framing (ISO 14496-15 vs. ITU-T H.264/H.265 Annex B).

* all: IETF BCP 47/RFC 5646 language tags: fixed a corner case of wrongfully allowing scripts/variants not listed in any of the entries in the prefix list when the prefix list contains prefixes restricting scripts/variants and a prefix solely with the language at the same time (example: the variant `ekavsk` with its prefixes `sr`, `sr-Cyrl` and `sr-Latn` where e.g. `sr-ekavsk` and `sr-Cyrl-ekavsk` should be allowed but not `sr-Bali-ekavsk`).
* mkvmerge: HEVC/H.265: the frame type of B frames was often wrongfully signalled as P frames instead, both with `BlockGroup` (missing second references) and `SimpleBlock` (“discardable” flag not set) elements.
* mkvmerge: SSA/ASS packetizer: the frame numbers will now be re-calculated when appending SSA/ASS tracks so that frame numbers of appended tracks are always strictly higher than frame numbers of the track they’re appended to.
* mkvmerge, MKVToolNix GUI’s chapter editor: BCP 47/RFC 5646 language tags: when BCP 47 language tags are used with a language code that isn’t part of ISO 639-2, the programs will now write a legacy language element set to `und` (“undetermined”) instead of not writing such an element at all or writing one with an invalid code. Fixes #3174.
* mkvmerge, MKVToolNix GUI’s chapter editor: BCP 47/RFC 5646 language tags: the programs will ensure that the legacy and IETF language elements written will be unique within the scope of the same “chapter display” element.
* mkvinfo, MKVToolNix GUI’s info tool: in summary mode the frame type was reported wrong for `BlockGroup` elements in which the `ReferenceBlock` elements were located behind the `Block` element.