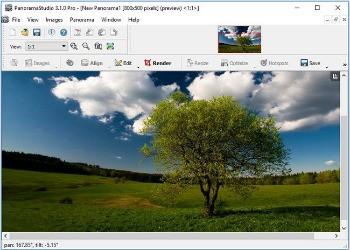 Highlights
• Easy user interface, large work space with a 2D and 3D preview
• Automatic alignement of single- and multi-row panoramas of up to full spherical 360×180 degree panoramas
• Seamless blending into a panoramic image
• Manual postprocessing of all steps possible
• Automatic exposure correction
• Panoramas can be connected to virtual tours in Java and Flash using hotspots
• Filters for additional image editing
Output
• Export your panoramas in various image formats, as screensavers and as interactive Java or Flash panoramas for websites
• Print panoramas in poster size on multiple pages
• Save panoramas as multi-layered image for professional post-processing
• A new render engine achieves an even higher quality for the panoramas
• An adaptive blending method
• A new exposure correction
• The camera database was again extended by another 200 new cameras and detects now automatically already about 1200 digital compact and SLR cameras
• Enhanced RAW import
• Many details improved…

• Improved exposure correction. The adjustment of individual images as well as the global exposure correction have been improved.
• New optional white balance in the multi-row mode.
• Improved and optimized Render procedure.
• Performance improvements of the static blending of about 10 to 20 percent and about 100 percent for the adaptive blending (“Anti-ghost”).
• New method to interpolate missing image content fills gaps or undefined areas around the panorama with blurred content of the nearby image areas.
• Optional use of the orientation information from the metadata of DJI drone images for a better alignment of such images.
• New interpolation methods allow advanced users more sophisticated render settings.
• Improved preview in the single-row mode. The preview after the alignment now contains fewer artifacts and is closer to the subsequent result.
• WebVR and VR controller support added to the PanoramaStudio Viewer. Interactive panoramas are now also running in browsers on VR headsets such as Oculus Go, HTC Vive and others.
• Added 75 new cameras to the camera database which contains now more than 2480 cameras.
… and many more improvements