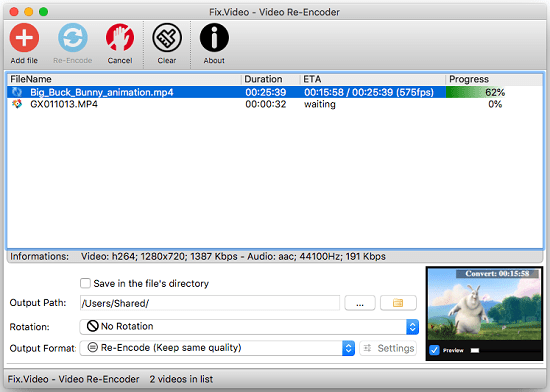 Fix.Video – Video Re-Encoder Portable provides a simple way of repairing broken or corrupted video files that either cannot be read by any video player or seem glitchy during playback. The solution to such problems is usually re-encoding and this application can easily carry out this task, while also allowing video compression and conversion.

With an interface that requires no guidance, Fix.Video – Video Re-Encoder enables you to load all the files that require re-encoding to its processing queue. It comes with support for a variety of file formats, including common ones (MP4, 3GP, MOV, DAT, AVI, FLV, MPG, MKV etc.).  As expected, the application can process multiple files in one go, meaning it supports batch operations.

The main window displays all the input files in an organized manner, in a table that shows the file duration and the conversion status. You can easily monitor the application’s progress as it processes files one by one.

Before hitting the re-encode button, you can optionally take the time to diagnose broken files. Fix.Video – Video Re-Encoder is capable of detecting the video type and extract relevant video information, such as its size, resolution and the used codec. Afterwards, it can run a detailed frame analysis with multiple matching tests to see if the file can be decoded and recovered.

There are not so many options to deal with before proceeding to converting the file but you can set the output location and optionally rotate the video, if needed. Fix.Video – Video Re-Encoder can re-encode the video to the same format without compromising on quality but keep in mind that it also works as a video converter, providing support for multiple output formats. In other words, you can use it to change the file type of your videos to a better-supported or modern format in case of incompatibility issues.

Re-encoding is the first thing to think about when a video seems broken and cannot be opened in any video player. From this point of view, Fix.Video – Video Re-Encoder can prove quite useful. The overall user experience is pleasant and the application is intuitive enough for anyone to use, even if not familiar with video transcoding and converting vocabulary.

When do you need to re-encode a video file?
1- When your file seems to be broken and can’t be read by any video player. The first thing to do in this case is to try to re-encode the file to see if it fix the problem.
2- Your file seems jittery, glitchy when you play it with your favorite video player. A video re-encoding process can solve this issue.
3- Your video File is too big and you want to reduce size.
4- Original format is unsupported on your device.