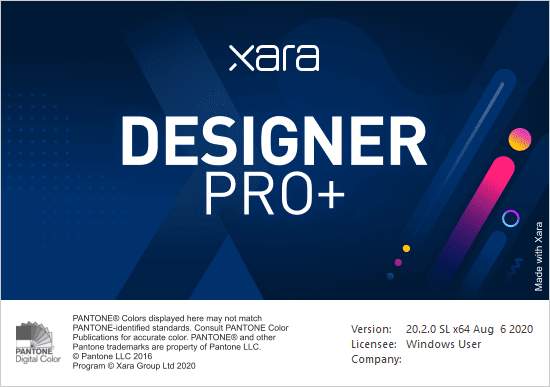 By combining all your design tools in one program, Xara Designer Pro achieves a smaller memory footprint, faster performance, no program switching and reduced hardware requirements, not to mentoin an easier learning curve, higher productivity and excellent value for money!

Xara Designer Pro is based on one of the world’s most sophisticated, high performance vector rendering engines. The ultra fast processing, even with complex illustrations or very high resolution photos, makes it a pleasure to experiment. Don’t let your software get in the way of your creativity!

Xara Designer Pro’s Direct Action Tools allow you to create effects such as transparency, shadows, bevels or gradient fills in an interactive, fast and intuitive way. No distracting dialogs – simply drag on the object!

Many tasks in Xara Designer Pro benefit from being able to use the drag and drop principle, which is the most intuitive way of working and a great time saver. It also supports drag and drop import of files, such as photos.

Being able to change what you have done is vital in a graphics package. Xara Designer Pro allows unlimited undo, making experimentation easy.

The Zoom tool allows magnification up to 25,000%, perfect for detailed work. And it’s super-fast and resolution independent too.

Xara introduced the world’s first vector anti-aliasing to bring maximum screen quality and is still a pioneer with the fastest, highest quality anti-aliasing available in any drawing program.

Instead of dragging outlines when you draw, move, rotate or resize objects, Designer Pro offers solid live object manipulation, which simply makes it much easier to see what you’re doing! Only Designer Pro is fast enough to do this on complex vector graphics.

Xara Designer Pro offers all the tools that a creative designer could need for illustration, text handling and page layout.

You can enter your text at any angle and you can also set your text along a curved path. Additionally, just like any drawn object in Designer Pro, you can freely resize it on the page, and produce creative display text by applying any of the effects, such as transparency, fills, molds and so on – and yet the text remains editable.

You have full word processor style control over the text appearance and formatting. You can create Text Styles, alter justification, tracking & kerning, indents/outdents and tabs and line spacing and easily create bulleted or numbered lists (with your own custom bullets and numbers if you wish). And there’s a spell checker.

Text can be entered as stand alone single words or lines at any place in the document, or in single or multiple columns.

Designer Pro offers everything you need for professional DTP, combining advanced text controls with flexible page layout features such as drag and drop editing of images and automatic text flow around objects.

Designer Pro is great for single page designs such as business cards or adverts, but it can also handle more complex multi-column, multi-page documents with ease, with automatic text flow onto new pages, automatic page numbering, full control of headers & footers, and very flexible controls over columns and the text flow between columns. And you can have single page or seamless double page spreads supporting across-the-spread graphics.

Uniquely Designer Pro can publish your multi-page print document on the web as a single scrollable document – it’s easy to view, totally WYSIWYG, and perfect for fast skimming and browsing of long documents or sharing your documents with others, without the bother of PDF.

Xara Designer Pro is the primary tool of many illustrators and includes a set of powerful but really easy to use vector line and shape drawing and editing tools.

The Quickshape tools (rectangle, circle etc) allow you to draw pre-set shapes very quickly and easily. Editing shapes and lines is easy and the Freehand line drawing tool even offers a slider for retroactive smoothing after you’ve drawn your line.

The powerful Shape Builder and Shape Eraser tools allow you to easily erase and build on your image, whether it’s a vector drawing or a photo.

Take any shape, and just drag on the face to create a beautifully lit and shaded 3D version. Drag on the sides to extend the extrude depth. It couldn’t be easier.

The blend tool tweens or blends from one shape to another. It’s ultra-fast, click-drag simple, works with vector shapes, text and photos.

Blends can be used to create complex highlights, blurred edges on objects, repetitive patterns and many other effects, in other words it’s a vital tool for creative design. Designer performs blending in a very quick and memory-efficient way compared to other drawing packages – meaning less waiting for you and less draining of your systems resources.

Xara was the first vector application to introduce transparency, and continues to this day to offer the easiest, most advanced transparency control of any software. With click-drag simplicity you can create graduated transparencies to any object, photo, text, and vector shape.

Xara was also the first application to offer vector feathering (sometimes called Soft Vectors). This is a technique of slightly blurring the edges of objects to help them blend into the background and enables high quality realistic images to be created more quickly and easily than in any other software.

The combination of feathering and transparency is great for any photo composition work, as well as realistic vector shading, vital for any good illustration.

Live Effects are plug-in effects that can be applied to any object, including vector drawings – they are called Live Effects because the vector object remains editable even after applying the effect. Most modern Photoshop plug-ins work as Live Effects, giving access to a huge range of special effects (and many plug-ins are included).

Xara Designer Pro offers several powerful tools that allow you to add realistic effects with a single click. Apply, remove, and modify semi-transparent (or ‘soft’) shadows to any object with the Shadow tool. Use the Bevel tool to add bevels to any object, giving them the realistic appearance of depth. And add contours around objects with the Contour tool. All resolution independent (don’t lose quality when you scale them)!

Designer Pro offers completely non-destructive photo editing (which means you can edit your photo as many times as you like without the loss of quality that is normal in other photo programs), and it uses a fraction of the RAM required by other products. It can handle multiple very high resolution images with ease, even on a modest PC.

Designer Pro is also unique in the way it handles and stores photos, which means that files containing photos can be anywhere from 3 to 100 times smaller than with other programs.

Combine this with features such as vector masking, layer blending, feathering – all in the non-destructive, memory efficient way – and you have something that no other photo tool can provide.

Designer Pro also offers web design features that make it a first class web authoring tool in its own right.

Xara Designer Pro includes a complete website creation feature that enables you to design state of the art, mobile-ready websites with ease, including mouseover and pop-up effects, NavBars and menus, animations and widgets. One click preview and free web hosting included. It’s the world’s most advanced WYSIWYG web page creator – and with no HTML skills required!

Xara Designer Pro gives you total design freedom – using drag and drop you can literally place anything, anywhere on the page. And things which are normally difficult to achieve in HTML are a snap in Xara Designer Pro – for example text with curved edges, text or graphics at an angle, text flowing around objects – no problem!

But Designer Pro has some clever tricks too, to make things easier for you – here’s just a few of the things that will save you time and trouble:

Liquid text flow around objects; easy mouseover, thumbnail and pop-up creation; automatic adjustment of photos to the correct web resolution; one-click change of site wide theme colors and shades; automatic color matching of imported objects such as buttons; a concept of ‘repeating objects’ such as headings and button bars – edit one instance and they all update; buttons and text panels that automatically stretch as you change the text, and smart repositioning of objects and resizing of pages as you add or delete text.

Modern web browsers offer great support for SVG, so since 21.6 we’ve been steadily building the types of graphical object that Xara automatically exports to the web as SVG. In 21.7 we add elliptical fills, wall shadows, mix and multiply transparency. We’ve also improved support for exporting groups as SVG.

Bottom line: It’s now possible to build graphically rich websites and web documents that have no bitmap images to download at all, and that means your pages load faster. That’s great news for usability and for SEO, since faster pages bring better page rank. Bonus: your content will look a lot sharper as SVG.

In addition to the SVG changes, we’ve made some refinements to the exported code that will significantly improve page load speeds, for the benefit of your SEO. In our tests mobile page load speeds were 15% faster!

A nice improvement for vector illustration, with the introduction of an easy way to maintain the angle of the bezier curve when you drag its handles to change its length in the Shape Tool.

As with every Pro+ update we’ve included a host of small but useful enhancements and fixes. In this release that includes:

Note: After start just click cancel when ask to connect to Xara cloud