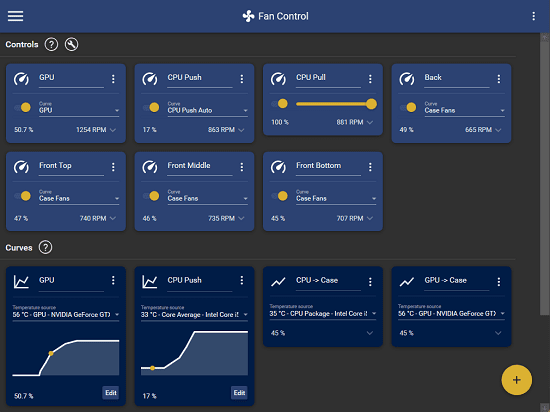 Keep every aspect of your computer’s GPU and CPU fans in check with the help of this highly-customizable fan control application.

Unless you’re a hardcore gamer or a user who actually needs to tweak his or her computer’s fan speeds, both the OS and the computer’s own internals do a pretty good job of keeping things under control.

If, however, you want more control over your computer’s fan speed and functions, you can use FanControl, a free fan controlling software. The main thing you have to know about FanControl is that it uses the following three libraries: LibreHardwareMonitor, MaterialDesignInXamlToolkit, and NvAPIWrapper.

All about the fan control without cutting down on customization options

Even though there are a couple of other apps of this sort out there, the main thing that sets FanControl apart is its high customizability. To be more precise, this is one of the few apps that allow you to mix different curves, sensors, and graphs and even create custom fan curves.

The fan curves types are linear, graph, target, mix, sync, and flat. The first one is based on linear function, the second on a custom curve, the third is based on a temp that holds the speed until a target temperature is met, the fourth allows you to use two different curves and apply a mix function (max, sum), and fifth syncs to an existing control, while the last allows you to set a fixed percentage value.

It allows you to save, edit, and load multiple profiles at once, and it’s capable of reading the temperature from multiple sources such as the CPU, GPU, motherboard, hard drivers, and the “.sensor” file. For example, you can create custom external temperature sensors using the said “.sensor” file.

However, the app’s main purpose is to provide you with as much control as possible in order to keep your workstation at an optimal temperature. Thus, you can fine-tune the fan control response with steps, activation percentage, and response times, and hysteresis.

The app also has a somewhat simple graph fan curve editor. It allows you to add, remove, and drag points around the graph. Of course, you can also copy and paste points from a graph to another, as well as fine-tune the response with the hysteresis and response time parameters.