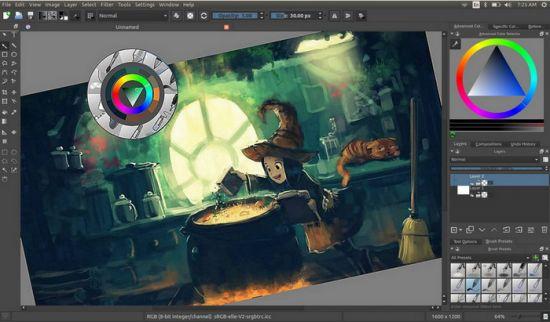 While some might think that everything that is digital art nowadays is made entirely in Photoshop, the truth of the matter is that the unsung heroes of most masterpieces (besides the artists) are the digital painting apps that don’t even get half of the credit. Designed for illustrators, concept artists, comic book creators, matte painters and even game artists, Krita Portable is one such application that should get a little bit more attention.

Put simply, Krita is a powerful digital painting and illustration utility that aims to provide you with as much creative freedom as possible, mainly thanks to its collection of tools.

Modern-looking, but a bit crowded interface

The app’s black-themed user interface falls perfectly into the modern style adopted by most digital editor or designer apps. The main window of Krita is extensively packed with almost all the features available within the app.

Once you start the tool, you realize that everything tends to be right in your face and, while it may seem a bit intimidating at first, after an adjustment period, things seem quite natural.

With Krita, you get CMYK support, HDR painting, perspective grids, painting assistants, dockers and one of the most comprehensive set of brushes available (each with its own patterns, settings and roles).

The engines for the brushes include effects like pixelate, smudge, duplicate, filter, hairy, hatching, texture, chalk, color smudge, curve, deform, spray and many others.

Another benefit is the fact that you can save the presets of your brushes, as well as experiment with many blending modes. In addition, Krita comes with modern and complex masking and selection tools.

With the possibility to select and paint shapes or colors, add transparency and opacity levels, this is a very capable tool if you want to apply non-destructive changes to your illustrations.

It is no surprise that an app such as Krita comes with support for both filter masks and layers. You are provided with options to add layers and effects like wave, oil, paint and emboss, as well as adjust their brightness and contrast levels.

Last but not least, for an added touch of creativity, the symmetry tools do a lot more than provide you with basic mirroring capabilities. You can determine parameters such as the angles and axes, modify the center position and play with other advanced settings.

Quite difficult to overlook by digital artists

While at the moment it may not be as popular, as optimized or as good looking as other digital painting apps out there, Krita packs a massive amount of tools and features that make it a very interesting and accessible solution for digital painters and illustrators.

One thing is certain, there are a lot of things Krita can do for you, as they are mostly limited by your own skill and talent, not by the app itself.

Features:
Krita Portable has a user-friendly interface. In the settings menu, you can choose the color theme, which toolbars and dockers you want to use, and edit keyboard shortcuts. Save a given set of dockers as a workspace and switch between them. The canvas can be easily rotated and mirrored. The OpenGL canvas supports high-bit depth monitors. There is a large set of options available to create a no-distractions canvas-only painting mode

It is easy to create seamless textures and patterns now. Press the ‘W’ key while painting to toggle wrap-around mode. The image will make references of itself along the x and y axis. Continue painting and watch all of the references update instantly. No more clunky offsetting to see how your image repeats itself. You can even paint off the edge and it will automatically start painting on the top. It is one of those features you have to see for yourself.

A brush engine is more than just a typical brush pattern with settings changed. Each brush engine has its own logic and behavior. The included engines are pixel, smudge, duplicate, filter, hairy, hatching, texture, chalk, color smudge, curve, deform, dyna, experiment (Alchemy), grid, particle, sketch, and spray brushes. Brush settings can be saved as presets and shared. There are a staggering amount of blending modes available. The blending modes are arranged by category and have your favorites stored at the top of the list.

Krita comes with many methods of selecting parts of your canvas in order to edit them. You can select with shapes such as rectangles and circle, paint your selection, polgon selection, select by color, select by Bezier. You can add, remove, or intersect to your selection. You can also make selection by layer contents by context clicking the layer and clicking “select opaque”. You can create a transparency layer by itself, or add one to an existing layer. This is great tool for non-destructive changes.

Symmetry tools that go much further than basic mirroring. Take full control by being able to determine how many axis you need. Modify the origin center, angle, and smoothing parameters. Easy to toggle x and y mirror buttons in the top toolbar. Drawing aids such as perspective grids and shapes that have magnetic settings.

Filters can be used directly on a layer, or as filter masks or layers. The effect of a filter is previewed on the image itself. There are special effects like wave, oil paint, and emboss. Adjustments such as levels, brightness/contrast, and HSV are also included. Additional tools that can be useful for making selections like color to alpha and color transfer.

A Toolbar Button for Wraparound Mode: