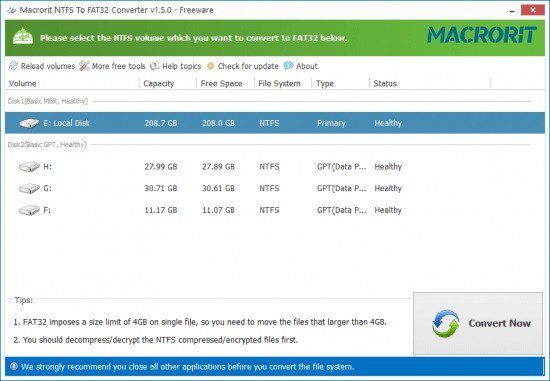 With Windows built-in Disk Management, FAT32 can be converted to NTFS but it is not so easy to convert NTFS back to FAT32. What’s more, if your NTFS partition is larger than 32GB or contains sensitive data, the conversion or formatting task will become more difficult.

For you guys XBOX360 or PS game fans, this tool is also your free assistant because XBOX360 or PS cannot read NTFS at all. With Macrorit NTFS to FAT32 Converter, you can make the conversion from NTFS to FAT32 become true so you can enjoy the game time

Dec 25, 2020
Loading ... Load More Posts No More Posts
You cannot print contents of this website.
We use cookies to ensure that we give you the best experience on our website. If you continue to use this site we will assume that you are happy with it.OkNoRead more