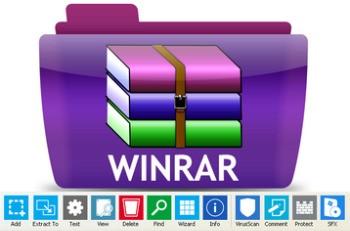 WinRAR 5 is a powerful archive manager (Windows, Linux, Mac). This is a powerful compression tool with many integrated additional functions to help you organize your compressed archives. It can backup your data and reduce size of email attachments, decompress RAR, ZIP and other files downloaded from Internet and create new archives in RAR and ZIP file format. The archiver puts you ahead of the crowd when it comes to compression. By consistently creating smaller archives, WinRAR is often faster than the competition. This will save you disc space, transmission costs AND valuable working time as well. WinRAR is ideal for multimedia files. It automatically recognizes and selects the best compression method.

Features:
• Using WinRAR puts you ahead of the crowd when it comes to compression by consistently making smaller archives than the competition, saving disk space and transmission costs.
• The program provides complete support for RAR and ZIP archives and is able to unpack CAB, ARJ, LZH, TAR, GZ, ACE, UUE, BZ2, JAR, ISO, 7Z, Z archives.
• WinRAR offers a graphic interactive interface utilizing mouse and menus as well as the command line interface.
• WinRAR is easier to use than many other archivers with the inclusion of a special “Wizard” mode which allows instant access to the basic archiving functions through a simple question and answer procedure. This avoids confusion in the early stages of use.
• WinRAR offers you the benefit of industry strength archive encryption using AES (Advanced Encryption Standard) with a key of 128 bits.
• WinRAR supports files and archives up to 8,589 billion gigabytes in size. The number of archived files is, for all practical purposes, unlimited.
• WinRAR offers the ability to create selfextracting and multivolume archives.
Recovery record and recovery volumes allow to reconstruct even physically damaged archives.
• WinRAR features are constantly being developed to keep WinRAR ahead of the pack.

2. Command line -tsp switch can be used to preserve the original last access time of archiving files. It can be combined with other -ts switches, like: rar a -tsc -tsp arcname files

3. It is allowed to combine several modifiers in the same -ts switch. For example, we can use -tscap instead -tsc -tsa -tsp.

4. WinRAR can read default values of command line switches from rar.ini text file, which can be stored either in the same folder as WinRAR.exe or in %APPDATA%\WinRAR folder. This file includes strings in following format:

First applies switches to all and second to individual commands.
For example:

Most of switches specified in rar.ini are used only in the command line mode. Some switches can be applicable both in shell and in command line modes. Previously this rar.ini format was supported only by console RAR.

6. Switches -ed and -e+d can be used in archive processing commands for any combination of RAR and archive operating systems. In older versions RAR for Windows could not use them for Unix RAR archives also as RAR for Unix for Windows RAR archives.

a) when extracting encrypted files directly from “Search results” dialog, password prompt was issued for every found file
even if all files belonged to same archive.

a) previous versions did not allow to use Ctrl+W shortcut to close WinRAR when comment window had keyboard focus. Now Ctrl+W works also from comment window;

c) for some lenghty comments with ANSI Escape sequences last line of comment was visible only partially even after scrolling up to bottom. It is displayed comletely now.

11. Maximum path length for files in 7z archives is increased up to 2048 characters. While such lengthy paths were already supported for RAR and ZIP formats, previous versions limited the path length to 260 characters for 7z archives.

12. If archive or file name is too lengthy to fit to archiving or extraction progress window, it is truncated. Previously such names were truncated at the end, making the file extension invisible. This version truncates them removing the path component and symbols in the middle, but preserving beginning of file name and file extension.

13. If files selected for archiving differ only by extension, a proposed archive name is based on their name part. For example, archiving dialog will propose Readme.rar if we selected Readme.txt and Readme.doc.

14. “Symlink” and “Hardlink” is diplayed in “Type” column for symlink and hardlink records in .tar archives. Previous versions displayed a proper type for such records only in .rar archives.

15. Copying and pasting files from large archives could fail if extraction took a lot of time. This version can paste files from such archives as well, but we have to start extraction already on “Copy” command and not on “Paste” to achieve this.

16. Similarly to RAR5 volumes, recovery volumes in RAR4 format use the same width of volume number field as corresponding RAR volumes. While previously WinRAR could create arc.part01.rar and arc.part1.rev in RAR4 format, now both types of volumes will use “part01”.

a) if “Use all tables” option or “t” modifer of “i” command are used, additionally to already supported ANSI, OEM and UTF-16 encodings WinRAR will search the specified string in UTF-8 files as well;

Jan 16, 2020
Loading ... Load More Posts No More Posts
We use cookies to ensure that we give you the best experience on our website. If you continue to use this site we will assume that you are happy with it.OkRead more