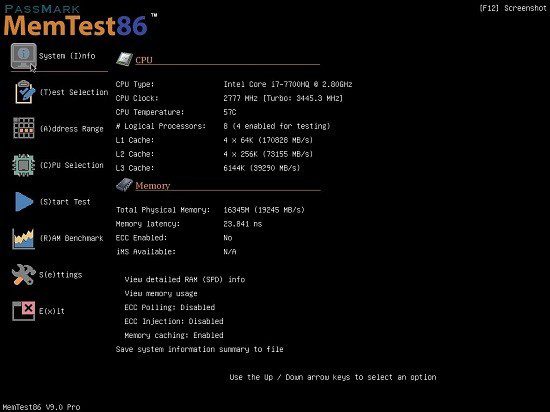 Memtest86 is considered by the majority of the hardware testing community the number one application when it comes to defective RAM sticks. The answer to the question regarding the working state of the installed memory modules comes fast with Memtest86 and that is what matters the most besides the certainty of the verdict.

There are many good approaches for testing memory. However, many tests simply throw some patterns at memory without much thought or knowledge of memory architecture or how errors can best be detected. This works fine for hard memory failures but does little to find intermittent errors. BIOS based memory tests are useless for finding intermittent memory errors.

RAM chips consist of a large array of tightly packed memory cells, one for each bit of data. The vast majority of the intermittent failures are a result of interaction between these memory cells. Often writing a memory cell can cause one of the adjacent cells to be written with the same data. An effective memory test attempts to test for this condition. Therefore, an ideal strategy for testing memory would be the following:

It should be obvious that this strategy requires an exact knowledge of how the memory cells are laid out on the chip. In addition there are a never ending number of possible chip layouts for different chip types and manufacturers making this strategy impractical. However, there are testing algorithms that can approximate this ideal and MemTest86 does just this.

The standard for memory diagnostics
– Boots from a USB flash drive to test the RAM in your computer for faults.
– Utilizing algorithms that have been in development for over 20 years.

Unreliable RAM can cause a multitude of problems. Corrupted data, crashes and unexplained behaviour.
Bad RAM is one of the most frustrating computer problems to have as symptoms are often random and hard to pin down. MemTest86 can help diagnose faulty RAM (or rule it out as a cause of system instability). As such it is often used by system builders, PC repair stores, overlockers & PC manufacturers.

Reports / Logs
Save results to disk