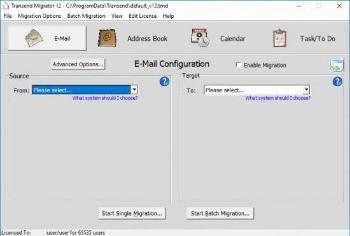 Over 30 million mailboxes migrated
Winner of the Windows IT Pro Editors’ Best Award for Best Messaging Product.
Used by large and smaller enterprises throughout the world, including the most renowned IT departments and consulting services

Selecting Specific Folders for Migration
By default Transend Migrator converts all folders in the source email mailbox. However, users can choose to migrate only specific folders, or exclude specific folders from their migration.

Schedule Migration
Administrators or end users may schedule a migration to begin at a later time by setting the start time on the Migration Schedule screen. Migrations performed later in the evening generally receive optimal performance, bandwidth, and no interruption. If there are other processes that must begin while the migration is running then users may also pause the migration, and continue after the processes are complete.

Entity Matching
Load lists of users from selected source and target systems and automatically match source users to target users. The results are then imported into the Batch Mode Data table for use in automating a batch migration. The match is done based primarily on the email address and secondarily on the display name. Once a match is made, the data imported into the data table consists of whatever is needed to connect to the systems in question.

Inventory Source Data
Get a snapshot of your source data prior to migration by creating a report of the source account. This report will list the folder, email, and attachment totals. You may also customize the report to include each folder name and subtotals by folder.

Command Line Processing
While Transend Migrator no longer requires that users run batch mode via command line only, the functionality still remains. For those who prefer, batch migrations can be automated via command line to run in virtually any environment or specialized situation.

Reporting
Migration reports in XML format will be created after each run, and they can be viewed and saved with Microsoft Excel. Custom Options are available to increase or decrease the level of detail captured in reports.

The default detail contained within the XML Report contains the following information: