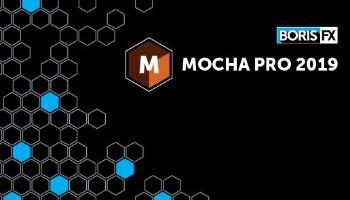 Say hello to MOCHA PRO 2019! Mocha Pro is the Academy Award-winning planar tracking tool for visual effects and post-production. With a proven record on the world’s most notable film and television projects, Mocha is valued by effects artists and editors for its unique ability to reduce the time-consuming keyframing associated with high-end VFX and finishing.

NEW MOCHA ESSENTIALS INTERFACE
The updated interface makes Mocha easier to learn than ever before and looks great on hi-res and retina enabled monitors!
The Mocha Essentials Workspace brings the power of Mocha to novice level users with a simplified, elegant, and easy-to-learn interface.
Tracking & masking is now faster by reducing complexity and focusing the Mocha interface on the most essential icons and tools. Switch to Classic for advanced modules and customize workspaces for flexibility.

PLANAR TRACKING
The Academy Award-winning planar motion tracker
Planar tracking is at the heart of all Mocha modules and is used to drive tracking, roto-masking, object removal, and more. Unlimited tracking layers and the advanced AdjustTrack interface can handle reflections, occlusions, noise, and even areas with motion blur or low details.
Learn how Mocha’s planar tracking has earned its reputation as the go-to tool on Hollywood films and must-see TV. Read our featured Mocha customer stories.