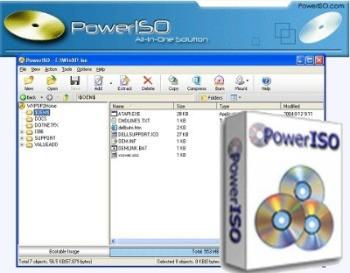 PowerISO Portable is a powerful image processing and file compression tool, which allows you to create, extract, compress, edit and convert ISO/BIN image files, and mount these files with internal virtual drive. And most of all, the compressed files can be used directly without decompressing.

Sure enough it’s a good idea to make extra copies of important stuff, with the possibility to save entire discs as virtual images. One of the most powerful software developed for CD/DVD burning purposes is PowerISO. It’s simple to use, fast, reliable, and most people who have used it can’t say otherwise.

PowerISO lets you manipulate CD and DVD image files, by creating, adjusting, converting, and mounting their content. The application can also work with ISO and BIN files.

During the installation process, you may choose file associations (PowerISO supports most of them), and the number of virtual drives to be mounted. Not to worry though, these settings can be adjusted afterwards.

The interface is very friendly and extremely easy to use, even though you lack experience in working with this type of software. The File menu allows you to create a new CD/DVD, Floppy Disc Image / Hard Disk image, as well as UDF or Video CDs Image.

PowerISO is also able to burn Blu-ray discs and convert popular image types to ISO and BIN format. Furthermore, the ISO functionality is just amazing: you get to add, delete or rename files inside the image or add boot information.

Also, PowerISO supports drag and drop and can create up to 23 virtual drives. The processing speed is amazing and resource consumption is pretty acceptable.