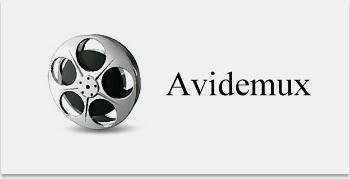 Imagine an application which does everything VirtualDub can do, but runs on various platforms, supports a lot of containers, comes with all Codecs you need built-in and doesn´t use the nasty VfW interface. That applications is Avidemux! And now the “official” version: Avidemux is a free video editor designed for simple cutting, filtering and encoding tasks. It´s graphical user interface looks pretty similar to VirtualDub and most features known from VirtualDub are available too. Avidemux natively supports a great number of file types, such as AVI, MPEG, VOB, TS, MP4, ASF, OGM, MKV and FLV. At the same time Avidemux natively supports a wide range of Video/Audio formats, including MPEG-1, MPEG-2, MPEG-4 ASP, H.264/AVC, DV, HuffYUV, MP3, AAC, AC-3 and Vorbis. Tasks can be automated using projects, job queue and powerful scripting capabilities. Video-DVD or (S)VCD compliant streams can be created with easy-to-use “Auto” wizards. Multi-threading is supported!

Many new video filters added by courtesy of <a href=”https://github.com/szlldm”>szlldm</a>
A dedicated MOV muxer is now available, replacing silent fallback to MOV muxing mode within the MP4 muxer.
A subset of color info relevant for HDR support is retained in copy mode when both input and output video are stored in Matroska / WebM containers. Settings to add or override color info have been added to MKV and WebM muxers.
The indexer in the MPEG-TS demuxer now detects resolution changes in MPEG-2 and H.264 streams which are entirely unsupported and suggests aborting indexing. If the user chooses to continue, it records file offsets of all resolution changes to the log. This allows advanced users to split the file at these offsets using other tools like head and tail into chunks which can be processed with Avidemux.
YUV varieties of the lossless Ut Video codec are supported now for decoding and encoding via bundled FFmpeg libraries.
Uncompressed 24-bit audio is now supported for a subset of file formats.
Limited support for 7.1 channel layout.
Decode and stream copy support for XLL substream in DTS audio tracks.
Audio properties are now updated on resuming playback. This allows to start saving after an audio format change. When audio format changes during playback, the FFmpeg-based audio decoder will output silence and keep format rather than producing garbage.
An option to keep the identity of markers A and B instead of swapping them automatically has been added to Preferences.
The keyboard shortcut for “Delete” action has been made customizable with alternative keyboard shortcuts enabled.

Multi-threaded video decoding is now available for the bundled FFmpeg. On powerful multi-core CPUs, this can drastically improve decoding performance. A maximum of 8 threads can be created, but a conservative custom upper limit of 4 is recommended. Values above 8 cause decoding failures. Multi-threaded decoding and HW accelerated decoding are mutually exclusive, changes require application restart to have effect.
The maximum supported resolution has been increased to 8192×8192
The bundled FFmpeg has been updated to the 4.2.4 release.
Non-standard display aspect ratios can be configured in MP4 muxer by specifying display width.
MP4 muxer accepts now MPEG-1 and MPEG-2.
The configuration dialog of the x265 video encoder plugin enjoyed massive cleanup and refactoring by <a href=”https://github.com/xyzzy42″>Trent Piepho </a>, more Adaptive Quatization Variance methods have been added.
Python interface has been substantially extended, includes now methods to query segment properties, the number and filenames of loaded videos, PTS of keyframes, methods to seek to time with preview updated, to open file dialogs filtered by extension and a built-in method to split filename extension from a given path.
Scripting shell now supports unicode characters.
On macOS, files can be loaded via Finder context menu or by dropping them onto Avidemux icon in the dock.
On Linux, Jobs GUI and the CLI executable can be launched from AppImage by creating a symlink with _jobs or _cli in filename respectively and running the AppImage via this symlink.

Rate control was broken in some video encoders, especially in VP9 and in NVENC-based encoders, fixed now.
Multiple issues in cut point checks for H.264 and HEVC streams in copy mode, leading to incorrect check results, were identified and resolved.
The first two frames of external AC3 or EAC3 audio tracks are not dropped anymore. This regression from enhanced protection against false positives, added 3 years ago, has been finally identified and fixed.
Indexing of MPEG-TS files with HEVC video was broken when video stream lacked access unit delimiters. The issue was identified and fixed right after 2.7.7 had been tagged as released and is the reason why version 2.7.7 was superseded by 2.7.8.
VU meter was grossly ahead of audio output on Windows, now it is just a tiny little bit ahead.
Numerous other fixes and overall polish.