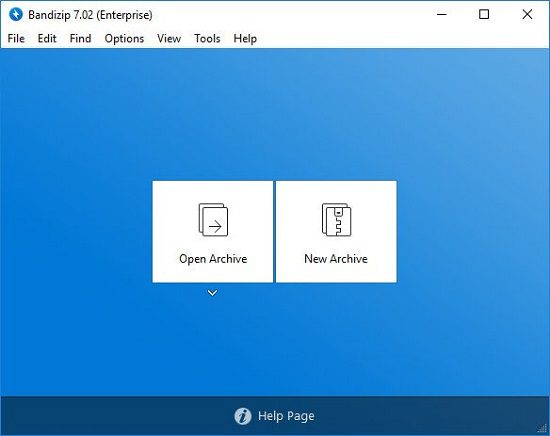 When you archive multimedia files (AVI, WMV, MP3…) or archived files (ZIP, RAR, 7Z…), you can’t get good compression results. These files are hard to compress and sometimes the file size could be bigger than the original one. Bandizip’s “High Speed Archiving” function will allow you to compress or bypass the files its own algorithm. It will increase the archiving speed dramatically.

Another advantage of BandiZip is that it supports Unicode system perfectly. BandiZip has “Code Page”, and it will allow you to select a language in archive without breaking international characters. With “Fast Drag & Drop”, “High Speed Archiving”, and “Code Page” functions, BandiZip might be the sensation in archiving software market.

Back in the days when floppy disks roamed the digital world and file archives were just emerging concepts, there wasn’t much choice in terms of compression software. Nowadays, there’s increasing availability and diversity for such apps, therefore standing out in such a pool usually takes something different. Bandizip Portable aims at impressing users with a compression and decompression tool that sports a comprehensive format compatibility list, coupled with intuitive handling for keeping things accessible.

Choose to either zip or unzip files, and preview their content with a capable archive visualizer

There are two big selector buttons on the main interface, which allow one to either compress or decompress data. We liked the simplicity of the concept and the design, as it leaves little to be desired, while still retaining the minimalism required for novices or those who appreciate it.

Furthermore, the provided archive viewer is also quite well-designed, offering a standard view of the loaded files, with customizable data columns, which can be rearranged according to one’s particular requirements.

Customize your OS experience thanks to the extensive settings on offer, which also feature strong context-menu integration tools

Of course, what good would a file zipper be if it weren’t for its system integration features, and especially the context menu? And this is where Bandizip manages to offer a good degree of configuration, thanks to the dedicated features addressing the integration process.

Furthermore, since we’re talking configuration, we believe that the entirety of the settings bank offers an ample amount of categories, each with an impressive amount of sub-entries, which we could see as quite fit for attaining your preferred setup in no time.

This software addresses those who need a capable archive tool, to help them compress or decompress files, in and from a wide range of formats, using an accessible platform.