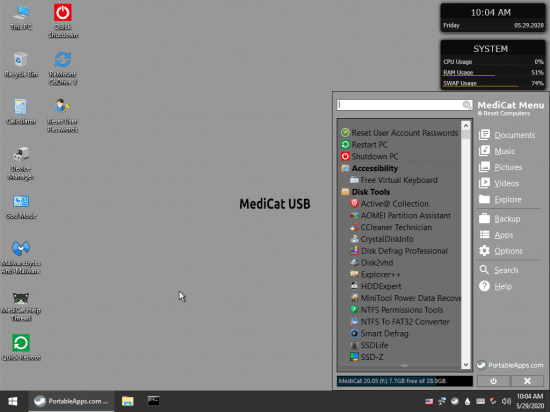 You get to access all sorts of programs right there, and even more if you are using a version of the toolkit that came with PortableApps included (this one). This include many tools that help you troubleshoot issues on a PC; to name a few: EaseUS Partition Master, HDDExpert, NTFS Permissions Tool, backup tools, Dead Pixel tester, CPU-Z, RegAlyzer, Dr.Web CureIt, Kaspersky TDSSKiller, Malwarebytes Anti-Malware, and Autoruns.

MediCat USB is a complete Hiren’s Boot Disk replacement for modern computers. MediCat USB aims to replace the discontinued and dated Hiren’s Boot Disk. It is geared towards modern hardware, and follows the Ubuntu release cycle with a newly-updated release every 6 months. The author of MediCat DVD designed the bootable toolkit as an unofficial successor to the popular Hiren’s Boot CD boot environment. The menu lists the following options in this regard:

Added:
+ Discord Portable has been reinstated and works again. It’s a little slow to startup and update itself, etc… but it does work.
+ DeepL Translator app in the PortableApps menu, for more fluent and smarter translations.
+ WBG Windows Password Reset was added to Jayro’s Lockpick by @AAA3A
+ @AAA3A created a Startup.bat script that loads anything placed into the Y:\System\Startup\ folder once the desktop loads in. This can be useful for opening a custem application you like, or a notepad document, for example.
+ @AAA3A and I have added a custom Wallpaper Changer script to Mini Windows 10. Place your custom background.png into the Y:\System\ directory (Y:\System\background.png) and your custom wallpaper will be set upon the desktop loading in. If you do not have a wallpaper located at Y:\System\background.png, the defaut wallpaper from X:\Windows\Web\Wallpaper\Windows\img0.jpg will be provided for you.
+ A Wi-Fi connection generation script was made by @AAA3A, and added to the build. What you do is edit Y:\System\Startup\Wifi.bat with your network’s SSID and Password, and switch the “set generation” flag to a capital ‘Y’. Run the Wifi.bat, and it will generate you a Wifi.xml file. Then edit the “set generation” flag back to a capital ‘N’ and save it. Now it will connect to your Wi-Fi network automatically every time you boot up Mini Windows 10.
+ MON5TERMATT#9999 on the MediCat USB Official Discord server compiled AAA3A’s batch file to an EXE that launches Tor Browser from the PortableApps Menu.
+ OnlyOffice Desktop Editor Portable has been added to the PortableApps Menu.
+ Many, many, MANY applications have been added to the Start Menu. Be sure to check out the entire thing, it’s LOADED with applications now!
+ Exported previous MediCat USB wallpapers to the Themes folders, so you can now choose any of the previous MediCat USB wallpapers.
+ New icon theme for the PortableApps menu, made by Discord user ijahangard#8048.

Removed:
– Extra copy of ShredOS I forgot to remove in the last version.

Menu Changes:
# Version info has been updated.
# New Wallpaper
# Better spacing adjustments for the F-key buttons at the bottom, since [F7] was added.

Fixed:
* Better trackpad support in Mini Windows 10, Malwarebytes Bootable, and Jayro’s Lockpick.
* Rebuilt Malwarebytes Bootable – When you update the Virus Definitions, make sure you exit the app in the task tray, and re-open it so the new definitions take hold. Otherwise you may BSOD. And on that note, when running a custom scan, make sure you uncheck all 4 boxes on the left side to mitigate your chances of getting a BSOD.
* Further improvements to overall system stability and other minor adjustments have be

Note: First thing to do is disable any “real-time scanning” in your antivirus software, including Windows Defender. Otherwise you will have applications get deleted from your USB stick during creation, and things won’t work properly. 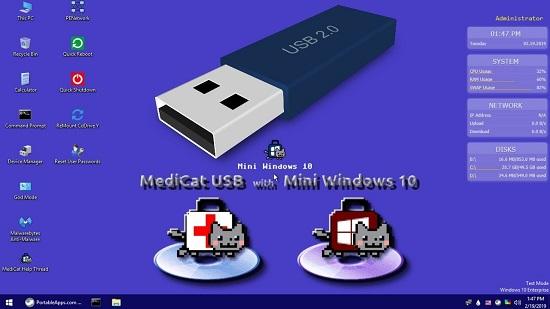