VirtualBox Portable is a hardware-specific full virtualizer. It is now the only professional quality virtualization solution that is also Open Source Software, aimed at server, desktop, and embedded use. VirtualBox is a powerful virtualization product that can be used in both the enterprise and at home.

Whether you are a professional software tester or simply like to test a variety of apps before settling on the one that best meets your needs, you are probably aware that a virtualized environment can save you a lot of time: you can install any app without fear of it messing up your previous settings, and you can uninstall it just as easily.

And if you want to test the same app on several operating systems, Oracle VM VirtualBox can be quite helpful.

The application comes with an intuitive interface that allows users to add a new virtual machine and choose the OS they prefer (be it Solaris, Windows, Linux, BSD or Mac OS X), as well as the exact version.

The next steps include assigning the new virtual machine the amount of RAM and HDD space it will take, as well as the type of storage, dynamic or fixed, it is to occupy on the PC.

In order to launch any virtualized OS, you simply need to press the Start button – once it is running, you can pause, reset or close your virtual machine, or even clone it or create a dedicated desktop shortcut to help you open it whenever you need it.

If you are an expert user, you can also benefit from the specialized functions of Oracle VM VirtualBox, such as shared folders, seamless windows, 3D virtualization, multi-generation branched snapshots, remote machine display and modularity.

Oracle VM VirtualBox also includes versatile hardware support, allowing you to create virtual machines with multiple virtual CPUs (regardless of how many cores you have physically on your PC), that recognize USB devices, or that have multi-screen resolutions, integrated iSCSI support, and PXE network boot.

A top product on the market

To wrap it up, it is safe to say that Oracle VM VirtualBox can come in handy to both novices and experts: while the former can get their virtual machines up and running in no time, the latter can customize their virtualized environment to the tiniest details.

Software vendors can use virtual machines to ship entire software conﬁgurations. For example, installing a complete mail server solution on a real machine can be a tedious task. With VirtualBox, such a complex setup (then often called an “appliance”) can be packed into a virtual machine. Installing and running a mail server becomes as easy as importing such an appliance into VirtualBox.

Testing and disaster recovery. Once installed, a virtual machine and its virtual hard disks can be considered a “container” that can be arbitrarily frozen, woken up, copied, backed up, and transported between hosts. On top of that, with the use of another VirtualBox feature called “snapshots”, one can save a particular state of a virtual machine and revert back to that state, if necessary.

This way, one can freely experiment with a computing environment. If something goes wrong (e.g. after installing misbehaving software or infecting the guest with a virus), one can easily switch back to a previous snapshot and avoid the need of frequent backups and restores. Any number of snapshots can be created, allowing you to travel back and forward in virtual machine time. You can delete snapshots while a VM is running to reclaim disk space.

Infrastructure consolidation. Virtualization can signiﬁcantly reduce hardware and electricity costs. Most of the time, computers today only use a fraction of their potential power and run with low average system loads. A lot of hardware resources as well as electricity is thereby wasted. So, instead of running many such physical computers that are only partially used, one can pack many virtual machines onto a few powerful hosts and balance the loads between them. 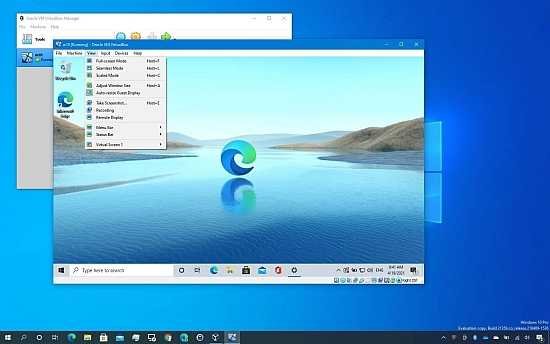