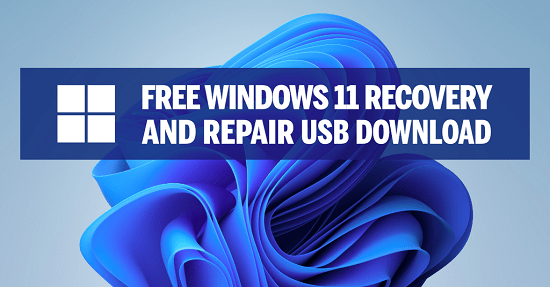 EasyRE for Windows 11 is probably the easiest and most reliable way to fix BCD boot errors, blue screens during Windows boot, startup errors, EFI bootloader problems, MBR issues and more. You can download EasyRE for Windows 11 for free today, and use it to create a bootable Windows repair USB with the free Easy USB Creator or create a free Windows recovery CD if you prefer that route instead. You just download EasyRE on any working PC, convert the ISO image download to a USB or CD with one of our free tools, then place it in the computer that needs repair and restart it, choosing to boot from the EasyRE CD or USB, and wait for it to load the main menu.

From there, you can start a completely automatic repair, initiate an offline virus scan of your PC (and because it’s an offline environment, rootkits can’t hide themselves from EasyRE!), use the partition editor, make a backup of your files to an external disk, or even browse the web.

EasyRE’s automated repair takes a completely novel approach to fixing boot problems by actually simulating step-by-step what Windows itself does when booting up – except when it encounters an error that would normally cause your Windows installation to halt the boot process and show an error message, it instead dynamically makes repairs based off the database of corrective procedures that is baked into Easy Recovery Essentials. In essence, instead of searching through a limited catalog of known problems and known solutions, EasyRE actually tries to boot the same way Windows does, letting it catch issues that would slip through the cracks with other repair solutions… including Microsoft’s very own.

EasyRE doesn’t shy away from sharing the details of the repair, and it reports issues it encounters while analyzing and repairing your Windows installation as they are encountered. And while EasyRE can’t actually fix any problems caused by failed or dying hardware, EasyRE includes a comprehensive memory scan stage that can usually pick up on issues caused by memory corruption (due to bad RAM in your PC or laptop, overclocking gone wrong, or problems with your motherboard and power supply) and checks for and reports any errors in reading or writing to the disk Windows is installed on, alerting the user to any issues that could indicate pending or ongoing hard drive failure.

EasyRE can automatically fix errors caused by Windows Updates, partial Windows upgrades, many cases of filesystem corruption due to power loss, partition issues, loss of the UEFI or MBR boot menus, BCD errors, incorrectly installed or removed essential drivers, and more. EasyRE is the only tool in existence that can automatically and losslessly convert an MBR installation to boot in UEFI mode – and, when it’s possible to do so safely, the reverse as well.

This latest EasyRE release features complete UEFI support and can boot from either CD or USB even on PCs with the BIOS compatibility mode (also known as the CSM) disabled or completely unavailable. This Windows repair tool is compatible with and has been tested on all the popular makes and models of Windows PCs and laptops, including those by Dell, HP, Lenovo, ASUS, Acer, MSI, Samsung, the Microsoft Surface, and more.

This website uses cookies to improve your experience. We'll assume you're ok with this, but you can opt-out if you wish. Accept Read More