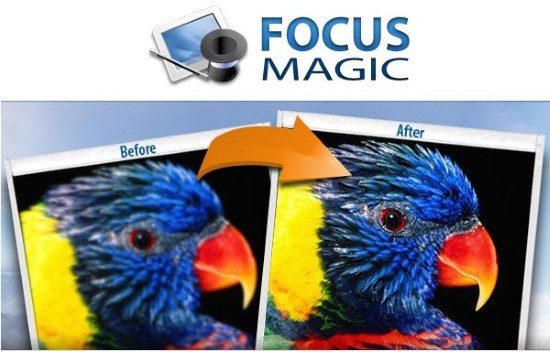 Focus Magic Portable can literally “undo” the blur using advanced forensic strength unfolding technology. Fix both blur and motion blur in one image. It’s the only software that can significantly recover lost details from blurry images. In the past, Unsharp Mask was considered the best way to sharpen a slightly blurry photo. Increases the contrast of the edges of the image to make them appear sharper. There are many programs that include unsharp masking (or sharpening) and even dedicated unsharp masking programs.

The calculation is very simple and runs fairly fast. However, Focus Magic does not use the Unsharp Mask principle to sharpen images. In order to restore the original “sharp” image as much as possible, advanced deconvolution is used to reverse the way the image is blurred.

It is currently the most accurate sharpening software in the world. We spent an hour taking deliberately blurry photos of the porcelain parrot (see left). These included blurry images and motion blur images with varying levels of blur. Then I sent them to many software applications. A small magnified section of the image is shown for comparison.

Focus Magic Portable is the only software available that can recover the license plate shown. It uses the most sophisticated deconvolution technology to literally “undo” blur.

Use Focus Magic to enhance old historic photos which have high sentimental value. From the examples in the comparison above, you can see that Focus Magic has the most accurate algorithm for reversing the blur in a photo.

For this photo, the camera focused on the background instead of the foreground (see full photo). With Focus Magic you can switch the depth-of-field around so that the focus is on the correct subject.

You only ever need to purchase Focus Magic once – even when we make upgrades or you change your computer. It’s yours to keep for life

For Motion Blur, select the direction and then the distance. For Out-of-Focus Blur, increase the Blur Width until the image looks the sharpest

Improvements That Have Been Made

Another two and a half man-years of research and development has been put by our developers into creating Version 6 which is now available for Windows.  The Mac version is still under construction. The main differences are:-

For the Focusing filter, Focus Magic now uses pattern matching rather than deconvolution (maths) to undo the blur of a photo.  This produces a cleaner and more natural looking output which has fewer artefacts (distortions).  The Motion Blur algorithm is the same as Version 5.  If you want to run the old Version 5 logic then you can do that as an advanced option by Ctrl-clicking under the “Remove Noise” control.

2. A New Filter “Auto-Focus” Has Been Added

With “Auto-Focus”, you can sharpen an image without having to determine the Blur Width first.  The output quality is usually a little less, but it is “Hands Free” and will do a good job with most moderately blurred photos.

3. The Increase Resolution Filter has been Improved Substantially And Is New For the Photoshop Plugin

You can now increase the resolution of an image either X2 (200%) or X4 (400%).   Where before this filter was only available to the Windows stand-alone program, it is now also available to the Photoshop plugin.

It now has an option of dealing with “halos” which are a side effect of in-camera sharpening.