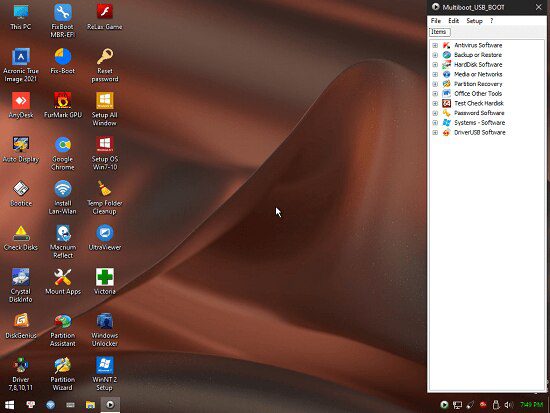 Nasiboot 2022 is a multipurpose Boot disk to use to boot into WinPE in case of emergency when our computer has a problem. Can’t get into windows or fix various problems It is bootable in both Legacy and UEFI versions. There are two versions of WinPE to choose from, Win10PE x64 and Win11PE x64. It is a bootable disc that includes all the necessary programs for troubleshooting computer problems such as data recovery, hard disk management, backup, hard disk health check, Windows password change. And so on, etc. This boot disc is made by Vietnamese, but the UI inside of both Windows and program is almost 99% English, but there may be one or two small software programs in Vietnamese. but the main program will be all english

-Fix errors in Report software from brothers and update new Apps
-Change the whole PE Component structure and how to install DRIVER AND APPS
-Add Bitlocker On and OFF function on WinPE (Note not to abuse On Bitlocker function)
-Update all Microsoft Drivers to add digital signatures to be able to install any Windows 10 and 11
-Separate APPS On to reduce RamPE to speed up boot, along with Right-click menu to adjust DPI resolution for SD,HD,FHD,2K,4K,8K
-Repair Code to install Window7-11 automatically 1 click after installation will install Driver Toupad,Lan,wlan,Sata etc.v
-Added Driver Mod USB3-SATA-AHCI-NVME For Win7,8 installed for high configuration machine (Note only applies 1-click installation of Nasiboot)
-Added driver Intel, AMD standard Microsoft updated 2022 and removed its Driver
– Intel and AMD 11th and 12th generation RAID hard disk mode support
– Support: Intel_11, 12th generation platform laptop touchpad
-Add the function of Installing Window 10.11 on Gen 11,12 from Setup.exe to bypass By Pass ,Bitlocker and install Driver Gen1,12 by yourself (Note: Wishing to bypass Bitlocker only test a few cases that have not been tested thoroughly)
– Fix Admin switch on Winpe11 as fast as PE10
-Update Bootx64.efi,Grub4EFI of Linux to support good BOOT on new machine

Please consider supporting us by disabling your ad blocker