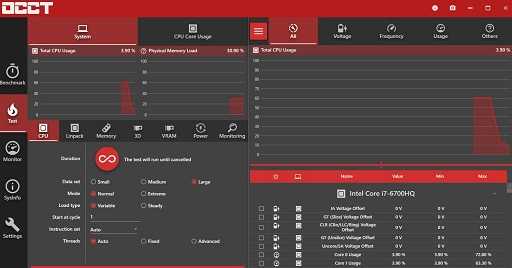 OCCT Portable is the most popular CPU/GPU/Power Supply testing tool available. OCCT is great at generating heavy loads on your components, and aims at detecting hardware errors or overclocking issues faster than anything else. A monitoring engine is also embedded, to ease diagnostic and see how your computer reacts under heavy load using graphs.

Computer performance is very important for every user, especially those who are working with applications that require important system resources to work properly. In order to enhance it, you can use an overclocking utility, such as OCCT (OverClock Checking Tool).

This software is designed to help you monitor system hardware components and allow you to overclock them. It provides testing tools for the CPU (benchmark OCCT and LINPACK tests), the graphics card and the power supply.

The interface is intuitive and comprises two panels, one that includes the ‘Monitoring’ section and the other that displays the available tests.
In its main window, OCCT Portable displays detailed information regarding your hardware devices, such as the CPU and the motherboard. Also, there is a table where you can view the current and the overclocked CPU and bus frequencies.

The CPU and the memory usage are constantly monitored and the values are displayed in a dynamic graph. By default, the program uses HWMonitor to generate them, but it also offers support from third party monitoring software, such as AIDA64, provided that you have them installed in your PC.

Whichever test you decide to choose, overclocking can easily be turned on or stopped anytime you want. Before starting, the user has the possibility to select the test type (infinite or automatic), configure its duration and idle periods, as well as other parameters, depending on the selected hardware device.

For instance, the LINPACK test allows you to choose the memory percentage, while choosing the GPU test lets you customize the resolution and the FPS limit.

Once the selected test is started, you can immediately view the effects on your CPU and memory usage graph, as well as the new values for the CPU frequency.

CPU:OCCT
OCCT’s own CPU test. Small data set is great at pushing your CPU to its limits, and Large data set is the best at finding errors quickly

CPU:Linpack
The famous Linpack test, known for pushing Intel CPUs to their limits. Not as great on AMD CPUs though, and less likely to pick up errors than OCCT

POWER SUPPLY
Combines CPU:OCCT and GPU:3D tests to stress your power supply and motherboard. This test is the most power-hungry included in OCCT. Useful to identify power-starved components !

Monitoring
OCCT will monitor your computer and present you real-time graphs showing you temperatures, voltages, fan speed, frequencies, component usage, and power consumption during your tests.

Built-in protection for your computer
Worried about frying your components ? Turn the maximum temperature threshold in OCCT’s options ! Should a component reach this critical temperature during a test, OCCT will stop itself immediately.

Test report
At the end of a test, you will be able to save a full graphical report of what happened during the test, for diagnostic purposes