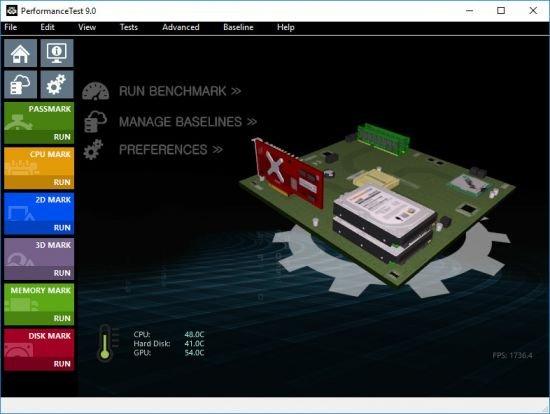 Fast, easy to use, PC speed testing and benchmarking. PassMark PerformanceTest allows you to objectively benchmark a PC using a variety of different speed tests and compare the results to other computers.

Features:
– Find out if your PC is performing at its best.
– Compare the performance of your machine to similar machines.
– Measure the effect of configuration changes and upgrades.
– Avoid paying big bucks for poor performance.
– Make objective independent measurements on which to base your purchasing decision.
– Use the advanced tests to create you own benchmark scenarios

The application includes the following additional features:
– Comprehensive online help
– Supports hyper-threading, and multiple CPUs testing
– Detailed disk speed graphs
– Supports printing results
– The ability to save your benchmark results to disk as a new baseline
– A customizable “Notes” field for storing your own information along with the saved Benchmark result.
– Support for copying the results to other applications (eg. MS-Word)
– Export results to HTML, text, GIF, and BMP formats
– Single test execution, execution of a test suite or execution of all tests with a single mouse click.
– A summary ‘Mark’ figure for each test suite plus the calculation of the PassMark Rating figure.
– An easy to use point and click interface
– A summary system information screen including CPU type, CPU speed, Total RAM, Video Hardware, Cluster size, etc..
– The ability to compare the performance of your computer to multiple ‘Baseline’ computers at the one time.
– Flexible license, move the software

Advanced Testing
The eight advanced testing windows allow experienced users to create their own test scenarios and conduct an in-depth analysis of their hardware’s behavior. Each advanced testing window allows the user to select from a number of parameters and when appropriate graph the results, export the results and measure the CPU load. By adjusting the input parameters is it possible to measure the optional performance under a variety of different scenarios.

Advanced Networking Test
Measure the network speed between any two computers using TCP/IP. The network speed test can be conducted across a company LAN or across the Internet to determine the point to point throughput. Adjust parameters such as the host name, IP address, port number and block size. Works with dialup modems, ADSL, cable and LANs.

Advanced Memory Test
Measure the read and write speed of your RAM. Parameters include data size (8 bits to 64 bits) and a selection of two test modes. Linear sequential access across various block sizes or non sequential access with a varying step size. This allows both the effect of RAM caching and the optimizations in the memory controller to be investigated.

Advanced Visualized Physics Test
View a visual representation of what the standard CPU Physics test is doing. You can also tweak the simulation parameters to get different effects.

Advanced GPU compute Test
Test your Videocard’s compute performance with a series of tests. Both DirectCompute and OpenCL.

Sep 17, 2020
Loading ... Load More Posts No More Posts
You cannot print contents of this website.
We use cookies to ensure that we give you the best experience on our website. If you continue to use this site we will assume that you are happy with it.OkNoRead more