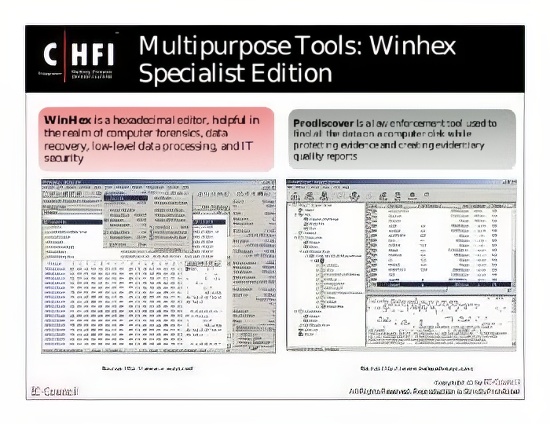 WinHex portable is in its core a universal hexadecimal editor, particularly helpful in the realm of computer forensics, data recovery, low-level data processing, and IT security. An advanced tool for everyday and emergency use: inspect and edit all kinds of files, recover deleted files or lost data from hard drives with corrupt file systems or from digital camera cards.

Refine Volume Snapshot
1) Particularly thorough file system search
• FAT12/FAT16/FAT32: This option searches for orphaned subdirectories (subdirectories that are no longer referenced by any other directory).
• NTFS: This option searches for FILE records in sectors that do not belong to the current MFT. Such FILE records can be found e.g. after a partition has been recreated, reformatted, moved, resized, or defragmented. With a forensic license, in a second and third step, this option also searches INDX buffers and $LogFile for noteworthy index record remnants, which either reveal previous names or paths of renamed/moved files/directories that were known to the volume snapshot before or deleted files that the volume snapshot was not aware of before (without file contents, though).
• UDF: While the first and the last session of multi-session UDF CDs/DVDs will be listed automatically, additional sessions in the middle can be found only with this option.
• CDFS: Usually all sessions on a multi-session CD/DVDs are detected automatically. In cases where they are not (e.g. when CDFS co-exists with UDF or if the gaps between the sessions are unusually large), this will detect sessions beyond the first one.
Taking a thorough volume snapshot is possibly a lengthy operation, depending on the size of the volume, and for that reason this is not the standard procedure when opening volumes.

2) The “File header signature search” option helps to include files in the volume snapshot that can still be found in free or used drive space based on their file header signature and are no longer referenced by file system data structures. You are asked to select certain file types for detection, specify a default file size, an optional filename prefix etc. Please see “File Recovery by Type” and the file type definitions for details. Files found with this method will be included in the volume snapshot only if there is no other file in the volume snapshot with the same start sector number yet, to avoid duplicates. Files found with this method are listed with a generic filename and size as detected by the “File Recovery by Type” mechanism. If applied to a physical, partitioned evidence object, only unpartitioned space and partition gaps will be searched for signatures, and always at sector boundaries, because the partitions are treated as separate, additional evidence objects.

3) Hash values can be computed for files in the volume snapshot. In addition to this, a forensic license allows to match the hash values against individually selected (or simply all) hash sets in the internal hash database. The filter can then later be used to hide known irrelevant files. Files recognized as irrelevant with the help of the hash database are also excluded from further processing as part of volume snapshot refinement if the corresponding option is enabled, which among other benefits saves time.

Shows information about the currently active disk or file and lets you copy it e.g. into a report you are writing. Most extensive on physical hard disks, where details for each partition and even unallocated gaps between existing partitions are pointed out. WinHex also reports the password protection status of ATA disks.
Forensic license only: WinHex is able to detect hidden host-protected areas (HPAs, a.k.a. ATA-protected areas) and device configuration overlays (DCO areas) on ATA hard disks. A message box with a warning will be displayed in case the disk size has been artificially reduced. At any rate, the real total number of sectors according to ATA, if it can be determined, is listed in the details report. Some important SMART status information is also displayed, for hard disks connected via [s]ATA that support SMART. Useful to check for one’s own hard disk as well as that of suspects. For example, you can learn how often and how long the hard disk was used and whether it has had any bad sectors (in the sense that unreliable sectors were replaced internally with spare sectors). If a hard disk is returned to a suspect and he or she consequently complains about bad sectors and accuses you of having damaged the disk, a details report created when the hard disk was initially captured can now show whether it was already in a bad shape at that time. Also, seeing that spare sectors are in use means knowing that there is additional data to gain from the hard disk (with the appropriate technical means).

Treats a currently open and active disk image file as either a logical drive or physical disk. This is useful if you wish to closely examine the file system structure of a disk image, extract files, etc. without copying it back to a disk. If interpreted as a physical disk, WinHex can access and open the partitions contained in the image individually as known from “real” physical hard disks.
WinHex is even able to interpret spanned raw image files, that is, image files that consist of separate segments of any size. For WinHex to detect a spanned image file, the first segment may have an arbitrary name and a non-numeric extension or the extension “.001”. The second segment must have the same base name, but the extension “.002”, the third segment “.003”, and so forth. Both the Create Disk Image command and the DOS cloning tool X-Ways Replica are able to image disks and produce canonically named file segments. Image segmentation is useful because the maximum file size supported FAT file systems is limited.
In some rare cases WinHex may be unable to correctly determine whether the first sector in an image is the sector that contains a master boot record or already a boot sector, and consequently interprets the image structure in a wrong way. If so, hold the Shift key when invoking this command. That way WinHex will ask you and not decide on its own. That will also make WinHex prompt you for the original sector size. When the segments of a raw image are spread across two different drives, you may hold the Control key to be able to specify the other storage location. Should there be any problems with detecting the file system in a volume, you may hold both Ctrl and Shift while opening it to indicate the file system type you suppose in the volume yourself.
Mode 1 ISO CD images are also supported, if they are not spanned, and (with a forensic license) also main memory dumps. With a forensic license, WinHex can also interpret .e01 evidence files, which can be created with the Create Disk Image command.

Traverses the currently open logical drive and gathers all unused clusters in a destination file you specify. Useful to examine data fragments from previously existing files that have not been deleted securely. Does not alter the source drive in any way. The destination file must reside on another drive.

Collects slack space (the unused bytes in the respective last clusters of all cluster chains, beyond the actual end of a file) in a destination file. Otherwise similar to Gather Free Space. WinHex cannot access slack space of files that are compressed or encrypted at the file system level.

Captures all space on a physical hard disk that does not belong to any partition in a destination file, for quick inspection to find out if something is hidden there or left from a prior partitioning.

Recognizes text according to the parameters you specify and captures all occurrences from a file, a disk, or a memory range in a file. This kind of filter is useful to considerably reduce the amount of data to handle e.g. if a computer forensics specialist is looking for leads in the form of text, such as e-mail messages, documents, etc. The target file can easily be split at a user-defined size. This function can also be applied to a file with collected slack space or free space, or to damaged files in a proprietary format than can no longer be opened by their native applications, like MS Word, to recover at least unformatted text.

Bates-numbers all the files within a given folder and its subfolders for discovery or evidentiary use. A constant prefix (up to 13 characters long) and a unique serial number are inserted between the filename and the extension in a way attorneys traditionally label paper documents for later accurate identification and reference.

Solves a security problem. When transferring unclassified material from a classified hard disk drive to unclassified media, you need to be certain that it will have no extraneous information in any cluster or sector “overhang” spuriously copied along with the actual file, since this slack space may still contain classified material from a time when it was allocated to a different file. This command copies file in their current size, and no byte more. It does not copy entire sectors or clusters, as conventional copy commands do. Multiple files in the same folder can be copied at the same time.