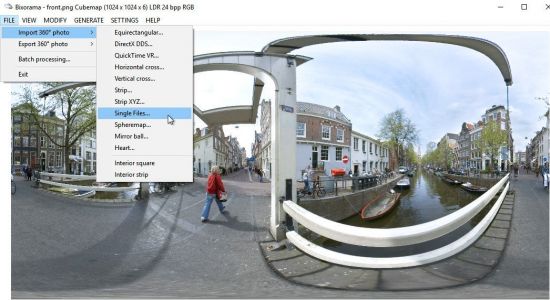 What is a 360° photo?
A 360° photo contains the full environment as seen from a single point: 360° horizontally and vertically. They are also called VR photos, virtual reality photos, panorama photos or panoramic photos.

Bixorama is a streamlined and efficient piece of software that aims to help you convert your panorama images. Plainly speaking, the tool makes it possible for you to import panorama pictures, apply effects or simply export them to another format.

Subsequent to a standard installation process, you can start using this app straight out of the box without the need for any initial configuration process.

Upon first opening this simple app, you are greeted by a minimalist interface, represented by a single toolbar and a preview panel. While a ribbon toolbar with large buttons for its main functions would have been more practical, the actual toolbar does a fair job of offering you access to the app’s important features.

Comes with support for most popular image formats

Probably the first thing you need to know is that Bixorama comes with support for the most common panorama-specific type of files, namely MOV, DDS, JPG, PNG and BMP. Note that, regarding Apple’s QuickTime VR MOV format, the app does not support files with compressed headers.

As far as editing capabilities go, Bixorama provides you with a small collection of projections or effects for your panoramas.

Taking all things into consideration, Bixorama is a useful software solution that makes it possible for you to export and convert your panoramas. The application can also help you add effects and edit your panoramas.